The Young and the Restless Spoilers: Rosales Family Returns To Y&R, Joins Rey or Will Sharon’s Man Exit GC For Miami? 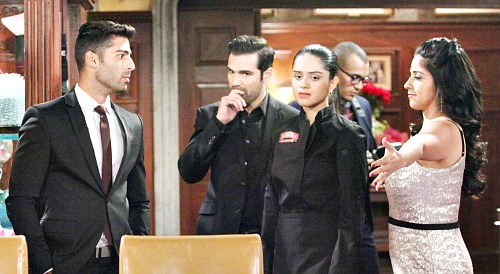 The Young and the Restless spoilers document that Rey Rosales (Jordi Vilasuso) is currently the last member of the Rosales family to remain in Genoa City, Wisconsin. That’s a shame because Y&R just created what was its first entirely new family in many years in 2018.

Lola Rosales (Sasha Calle) was the last person, beside Rey, to remain in town, until recently. Calle’s character recently departed GC, leaving Vilasuso’s character as the lone representative of his family.

Eva LaRue (Celeste Rosales) earned her first Emmy award at the forty-seventh annual Daytime Emmy Awards, that were held virtually. Celeste’s storyline was linked to Lola’s wedding plans, which were realized with a wonderful ceremony.

The nuptials did include drama for both halves of Kola. As for Lola, her estranged father, Adrian Rosales (Jay Montalvo), was written into the show.

There appeared to be plenty of more plot line to play for LaRue, whose solid daytime credentials include her long run on All My Children as Dr. Maria Santos Grey. However, scant references followed Celeste’s return to Miami, Florida.

The last viewers heard of Celeste was when Lola was informed earlier this year that her mother had been in a car accident, with a broken ankle resulting. Months later Lola returned to Miami to address construction issues with her soon-to-open restaurant.

The fact that Rey’s younger brother, Arturo Rosales (Jason Canela), and ex-wife, Mia Rosales (Noemi Gonzalez), had a child is reason enough to write one, or both characters back. It felt unnatural to see Narturo leave town and then not return as a couple.

Arturo was back last summer for Lola’s wedding to Kyle Abbott (Michael Mealor). But Arturo’s son, Matteo Rosales (no child actor known to be cast for this role), hasn’t been seen in-person and neither has his mother. So, this is a natural opening if TPTB opt to reunite the Rosales family in Wisconsin.

Young And The Restless Spoilers – Sharon Newman’s Storyline Is Key

Rey’s main focus has been on Sharon in recent months, due to her cancer diagnosis and treatments. When viewers last saw her she was scheduled to have surgery in an attempt to remove the tumor in her breast. It was said to be less invasive than what was initially feared.

Surely, Rey will remain in the storyline until Sharon’s situation is resolved. But after that happens will Rey join his family in Miami? CDL is a leading source for everything linked to The Young and the Restless. Check back regularly for Y&R spoilers and news!