The Young and the Restless Spoilers: Sally Needs Romance – Should Y&R Bring On Justin Gaston In A New Role? 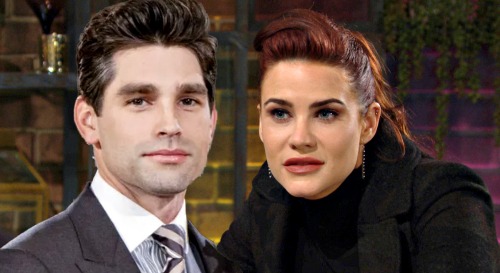 The Young and the Restless spoilers tease that Sally Spectra (Courtney Hope) is having a rough time lately. Sally seems like she’s focusing wholly on getting her career back on track since she’s moved to Genoa City, but that hasn’t been going so well.

Sally had her eye on running Jabot Collective (JCV) but none of her lobbying for the JCV gig worked to her advantage. Instead, Summer Newman (Hunter King) got the job, and Sally’s still relegated to being Lauren Baldwin’s (Tracey E. Bregman) assistant.

Perhaps what Sally really needs right now is a good relationship with someone – but who might that end up being? Eventually, it would seem that Sally would need to be paired with someone, but with the exception of Theo Vanderway (Tyler Johnson) and Jack Abbott (Peter Bergman), Genoa City’s men seem to be embroiled in other relationship dramas.

And when it comes to Theo, it doesn’t seem like Sally is at all interested. In fact, Sally directly undermined Theo by telling Jack that Theo asked her to spy on the Abbotts for him.

Plus, Theo’s time on Y&R is almost up, so that’s a go-nowhere relationship. And as for Jack, it doesn’t seem like either he or Sally are interested in each other, so that seems like a no-go as well.

However, we can think of someone who could conceivably be added to Y&R’s roster who might be a good pairing for Sally…and that’s a new character played by Justin Gaston.

Justin is temporarily portraying Chance Chancellor on the show, as he’s standing in for Donny Boaz, who contracted COVID-19 and had to bow out of filming for a while. Justin’s doing a great job, and fans have been enthusiastic about his presence on screen.

What if Justin could come back in new role to the show? Sally could use a love interest, and she and Justin just might have some on-screen chemistry together.

Justin could come on as a new character perhaps from the Fenmore’s world – maybe as a buyer or as a fashion personality. Justin could even be someone who finally gives Sally her big second chance in fashion, and then romance could blossom.

It seems that fans would probably embrace Justin in a new role, even considering that he will have briefly portrayed Chance. Once Donny Boaz is back playing Chance and a little time goes by, we don’t see any reason why Justin couldn’t return to the show playing a new character.

Stranger things have certainly happened in the world of soaps!

What do you think about our idea? Would you like to see Justin come back to Y&R as a new love interest for Sally? Stay tuned to the CBS soap and remember to keep CDL bookmarked for all the hot new Young and the Restless spoilers news. We’re your go-to place for all the soaps!