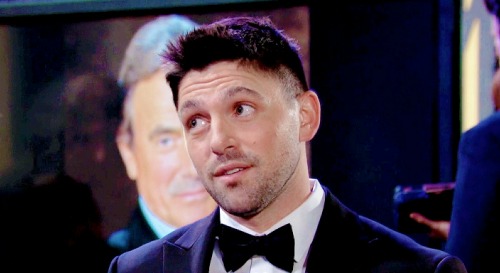 The Young and the Restless (Y&R) spoilers tease that Lola Rosales (Sasha Calle) will find herself falling harder and harder for Theo Vanderway (Tyler Johnson). Lola’s always been able to see a different side of Theo, who’s proven to be a bit of a bad boy. Even Summer Newman (Hunter King) admitted that Lola brings out something in Theo that she’s never seen before.

However, Y&R’s offered up some hints about Theo’s less than pure motives. Kyle Abbott (Michael Mealor) has expressed concern about Theo’s interest in Lola. Since there’s so much competition between Kyle and Theo, Kyle can’t help but wonder if Theo only wants Lola so he can stick it to him.

Theo denied that getting under Kyle’s skin was his main reason, but he does view it as a bonus. Just because Theo enjoys Lola’s company doesn’t mean this is about true love. The Young and the Restless spoilers point to more trouble in the spring preview. There’ll be more worries and warning signs regarding Theo’s motives, so we have to consider the possibility that Lola will get hurt.

Theo’s currently plotting against Kyle at Jabot, which Lola isn’t going to approve of. It just goes back to the suggestion Summer made once upon a time. Summer pointed out that Theo wants Kyle’s whole life. Theo’s apparently obsessed with his cousin and intends to emerge victorious on every level.

Once Theo “conquers” Lola, he may get bored with her. Theo seems like the kind of guy who likes the chase more than the prize. Regardless, Theo should show his true colors eventually and give Lola reasons to doubt she man she’s falling for. Lola and Theo’s romance could wind up being pretty short-lived in the end.

Could there be another option for Lola once she gets burned yet again? Y&R fans will recall that Noah Newman (Robert Adamson) came home for Newman Enterprises’ anniversary party and to catch up with Sharon Newman (Sharon Case). Noah wanted to stay in town, but Sharon pushed Noah to head back to London and continue his career.

However, Noah vowed to return when Sharon has her surgery – which could easily be right around the time Lola and Theo’s new relationship implodes. Although Noah admitted he was seeing someone, it wasn’t too serious. They’re still taking it slow, so Noah could be single when he comes home again as promised. It sounded like the kind of thing that could fizzle without a solid commitment.

If anyone can understand being unlucky in love, it’s Noah. The Young and the Restless might be looking for a fresh option for Lola by then, so it’s worth considering how Noah’s return will factor in. Maybe Lola could give Noah a reason to stick around!