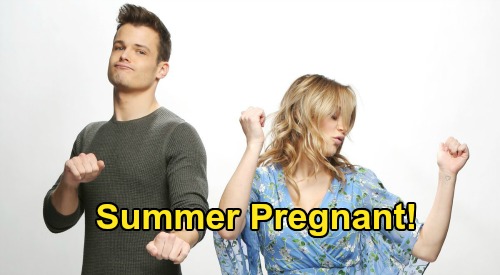 The Young and the Restless (Y&R) spoilers tease that Summer Newman (Hunter King) and Kyle Abbott (Michael Mealor) could find themselves without a major source of drama. According to an insider report, Sasha Calle (Lola Rosales) and Theo Vanderway (Tyler Johnson) are set to exit the CBS soap.

Of course, that could create a surprising dilemma. Lola served as a huge hurdle to Summer’s journey back to Kyle, but he ultimately chose Summer in the end. Since Lola’s been quite amicable during the breakup aftermath, that’s just left Theo to cause conflict and problems.

What happens after Theo’s fired from Jabot during the week of April 20-24? Even if Theo takes one final shot at revenge, his time in Genoa City seems to be winding down. Kyle and Summer could find themselves in a Lola-free and Theo-free zone, but that’s also a place without any drama at all.

With that in mind, we have to think about what might give Summer and Kyle a new story. Let’s consider the theme Y&R’s been pushing for these two lately. Although Summer’s thrilled to be back together with Kyle, she’s all about pumping the brakes.

Summer wants to do this right, which means taking things slow and not rushing into the next step.

Since Summer doesn’t want anything to propel their love story forward too fast, this would be the perfect time for a pregnancy scare. It might even prompt very different reactions from Kyle and Summer.

Naturally, Summer would freak over a potential bun in the oven. Again, The Young and the Restless fans know she’s not in any hurry! Kyle, on the other hand, might think the idea of Summer having a baby and starting their family sounds nice – even if they aren’t really ready. We could see a less nervous Kyle than we saw with Lola’s pregnancy scare.

Soap babies come whether couples are prepared or not, so Kyle might convince Summer that they could handle this. Even if this turned out to be a false alarm, it might show Summer that they’re indeed ready to pick up the pace. Potential Daddy Kyle’s enthusiasm could prove it!

A pregnancy scare could set up a marriage proposal or some other big step forward in “Skyle’s” relationship.