The Young and the Restless Spoilers: Tessa Proposes to Mariah – Wedding After Sharon’s Cancer Recovery? 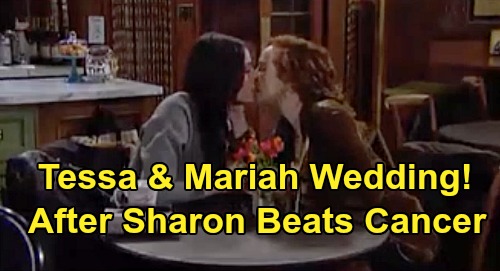 The Young and the Restless (Y&R) spoilers reveal that one CBS soap character seems to have marriage on her mind! In the April 9 episode of Y&R, Tessa Porter (Cait Fairbanks) offers reassurance to Mariah Copeland (Camryn Grimes). Mariah’s worried about Sharon Newman’s (Sharon Case) breast cancer fight, but Tessa intends to be there for Mariah no matter the outcome.

In a sweet moment at Crimson Lights, Tessa insists she’ll always be there and will always be Mariah’s. After Mariah decides that’s the nicest thing anybody’s ever said to her, Tessa seems thoughtful and even a bit nervous about what she’s going to say next.

“Well, here’s something nicer,” Tessa hints. “Why—why don’t we just make it offic—” That’s when Mariah lunges forward to intentionally cut Tessa off with a kiss. It sounds like Tessa was about to deliver a low-key marriage proposal. Tessa was seemingly going to say “make it official” before Mariah’s intervention.

Mariah makes it clear that the move was deliberate by suggesting that she can’t wrap her head around anything else right now. However, Mariah adds that once Sharon’s feeling better and they’re feeling grounded, she wants to hear every detail. Tessa vows to sweep Mariah off her feet when the time comes, so an engagement definitely appears to be in the works here.

Although some might think it’s rushed for Tessa to be in this frame of mind so soon after the cheating fiasco, that’s not really the case. Tessa’s always been the kind of gal who just wants to put her problems behind her. She had a rough life before she met Mariah and that’s just how Tessa learned to survive.

Tessa never holds things against Mariah for very long. She especially wouldn’t now that she’s home and can fully grasp what Mariah’s up against. Tessa’s all about supporting Mariah in any way she can, so that’s why this almost proposal’s happening.

Mariah seems to be letting go of her old insecurities anyway, but Tessa still wants to show a sign of commitment. This is an attempt to prove Tessa means it when she says she’s not going anywhere.

Mariah and Tessa have established that they’re forever, so marriage would make it official – just as Tessa tried to convey before Mariah’s lips stopped her!

Although Mariah and Tessa are tabling the discussion for now, it’s good to know that’s a step they want to take. It’s also good to have an idea of how that marriage proposal will go down.

Mariah tends to be the one with all the grand gestures, so let’s hope Y&R sticks to this plan of Tessa popping the question. It’d be a great opportunity for Tessa to do something special and show the depth of her love.

A Halloween wedding would be quirky and fun, so that would fit Mariah and Tessa’s personalities. “Teriah” fans would certainly love this nod to their favorite couple’s history. A wedding would also serve as the ideal celebration once Sharon’s cancer storyline wraps up.

The Young and the Restless spoilers say Sharon’s health will remain the priority for a while, but some “Teriah” nuptials could indeed happen down the road. That’s some happy news to look forward to as Sharon’s cancer battle continues!

As other Y&R info comes in, we’ll be sure to pass along more updates. Do you think Mariah and Tessa will marry after Sharon’s cancer recovery? Is a “Teriah” wedding coming up? CDL’s your hotspot for exciting Young and the Restless spoilers, updates and news.