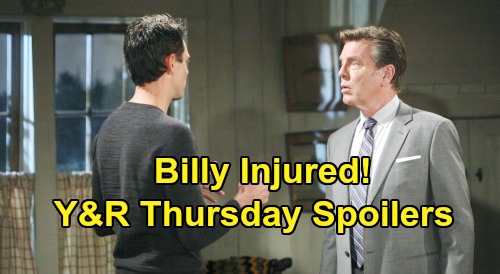 The Young and the Restless (Y&R) spoilers for Thursday, February 13, tease that Jack Abbott (Peter Bergman) will hope he can get through to Billy Abbott (Jason Thompson). Billy has never felt more alive, but Jack’s concerned about his brother’s downward spiral. He’s seen Billy go down a bad road too many times to ignore the warning signs.

Of course, Billy doesn’t view his behavior as reckless or dangerous. He just wants the freedom to make choices and not have judgment passed down on him. That’s probably why Jack’s plan to help Billy will flop spectacularly. The latest Y&R news reveals Billy will get injured as a result!

Then again, Jack may simply push Billy too far with all his nagging. His overprotective brother routine may convince Billy to do something wild. Either way, The Young and the Restless spoilers say Billy will wind up getting tested for a concussion soon.

Billy will get checked out by Dr. Nate Hastings (Sean Dominic), who’ll give Billy a peculiar diagnosis. Nate will insist that Billy’s addicted to adrenaline.

Billy will find it hilarious that he’s a literal adrenaline junkie. He won’t heed Nate’s warning about taking care of himself and putting safety before the thrill. That could lead to more trouble if Billy isn’t careful!

Over with Victor Newman (Eric Braeden), he’ll be taken aback by a special visitor. A surprise guest will show up, but will this be a good surprise or a bad one?

Time will tell, but it doesn’t look like any of Victor’s gala guests are set to be in town just yet. There’s always a chance someone will pop up sooner than planned, but this visitor could easily be someone already in Genoa City.

Ripley Turner (Christian Keyes) is a stalker, so he’s the kind of guy who does his research. Could he confront Victor about his Amanda Sinclair (Mishael Morgan) investigation?

Could Ripley want updates on the nature of Amanda and Billy’s relationship? Amanda sends Ripley out of town in Wednesday’s Y&R episode, but The Young and the Restless spoilers say that won’t be the last fans see of him.

Whatever the case, Victor will give this mystery person a warm welcome or a cold kick to the curb depending on who it is. One thing’s for sure: Ripley will cause serious drama for the Newmans as February sweeps continues.

We’ll give you updates as we get closer to the turmoil and terrible news ahead. The Young and the Restless spoilers say some great scenes are coming up, so don’t miss all the action.