BY Heather Hughes on January 21, 2020 | Comments: one comment
Related : Soap Opera, Spoiler, Television, The Young and the Restless 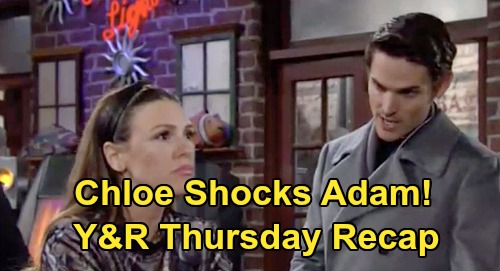 The Young and the Restless (Y&R) spoilers recap for Thursday, January 23, teases that some hot drama’s ahead. Before we dive in, we have a programming note to pass along. Due to impeachment trial coverage, Tuesday’s episode has been pushed back to Wednesday – and that means this episode will be pushed to Thursday. Just keep that schedule change in mind!

At the Grand Phoenix, Adam Newman (Mark Grossman) will share some warm moments with Chelsea Lawson (Melissa Claire Egan). They’ll chat about a tech company that Adam purchased, which focuses on video games.

Adam will kid around about Connor Newman (Judah Mackey) testing games before the topic of his new school comes up. Chelsea and Adam will acknowledge that it’s Connor’s first day there.

Chloe Mitchell (Elizabeth Hendrickson) will look disgusted as she watches a “Chadam” kiss. Once Chelsea walks over, she’ll let Chloe know she doesn’t want to hear anything negative about Adam.

Next, Phyllis Summers (Michelle Stafford) will chat “Chance” Chancellor (Donny Boaz) up. Abby Newman (Melissa Ordway) may be busy this week, but Phyllis will make it clear that her schedule’s open.

Chance will realize Phyllis is asking him out on a date. He’ll promise to have dinner with Phyllis soon, but he’ll have to turn his attention to Adam in the meantime. “She” – meaning the woman being paid off in Vegas – has gone missing.

Chance will think that’s a problem, but Adam will feel like he’s got a grip on things. He’ll point out that when it comes time to cash her check, she’ll surface.

Chance will snap that Adam had better be right. Chelsea will look uneasy over their interaction nearby, but she’ll eventually head to Crimson Lights with Chloe. The Young and the Restless spoilers say these moms will be pleased as Connor and Bella Fisher (Martie Blair) get along. Talk will turn to Chloe’s impending bundle of joy, so she’ll confess she’s hoping to give Bella a little sister.

Chloe will also reflect on the cornea donation and how Connor looks at Bella though Delia Abbott’s (Sophie Pollono) eyes. When Adam walks in, Chelsea will insist she didn’t set this up. Chloe will introduce Adam to Bella before taking him aside for a private conversation.

After Chloe suggests she wishes she’d left Adam to die in the street, he’ll determine that Chloe must’ve been the one who saved him. Y&R fans will recall how Chloe pushed Adam out of the way when Billy Abbott (Jason Thompson) was set on mowing him down. Chloe will confess that she did it for Billy, but Adam owes her.

Adam will vow to provide a happy life for Chelsea and Connor. He’ll gush over the kids, but Chloe will want Adam to stop trying to pretend he’s human. Once Chelsea has an opportunity to grill Adam, she’ll express curiosity over his discussion with Chance earlier. Adam will assure Chelsea that there’s nothing she needs to know about.

At Jabot, Kyle Abbott (Michael Mealor) will be suspiciously nice to Theo Vanderway (Tyler Johnson), so Summer Newman (Hunter King) will wonder what’s up. Kyle will suggest he’s going kill Theo with kindness and drive him up the wall.

Meanwhile, Jack Abbott (Peter Bergman) will warn Theo about the tension he’s picked up on. He’ll point out that he’s seen Theo needling Kyle and doesn’t want to this to be an issue. Jack will insist that he doesn’t intend to discuss this matter again.

At Society, Lola Abbott (Sasha Calle) will open up to Devon Hamilton (Bryton James). She’ll confess that she had a fight with Kyle, which left her feeling scared. Afterward, Kyle will join Lola and hate that he’s leaving before they’ve had a chance to talk things out. Lola will offer reassurance about doing it later, and they’ll kiss goodbye.

Before Summer heads off on her business trip with Kyle, she’ll drop by the hotel. Phyllis will hint that she hopes Summer won’t make a play for Kyle – although she’ll be certain her daughter could win him back with ease. The Young and the Restless spoilers say Phyllis will think Summer’s the far better woman and Kyle knows it.

After Kyle shows up, Summer will bid her mom farewell and head out with him. That’ll leave Phyllis looking pensive over Summer’s situation. At Society again, Fenmore “Fen” Baldwin (Zach Tinker) will tell Devon that he’s going to pass up the next tour. Fen will want to be careful about staying clean and sober.

Later, Lauren Baldwin (Tracey E. Bregman) and Michael Baldwin (Christian LeBlanc) will get updates. They’ll be glad Fen’s doing what’s best for himself. Fen will also bring his parents up to speed on his plan to move to Nashville.

Back with Theo, he’ll walk in the restaurant and gaze at Lola. Theo will ultimately decide to resist temptation and walk away – at least for now! We’ll give you updates as other Y&R news comes in. Stay tuned to the CBS soap and don’t forget to check CDL often for the latest Young and the Restless spoilers, updates and news.