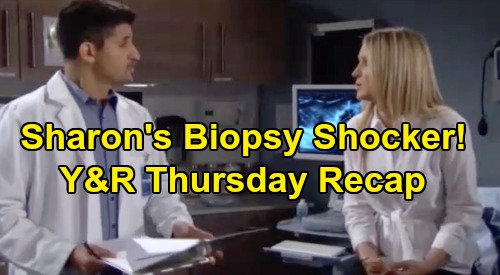 The Young and the Restless (Y&R) spoilers recap for Thursday, January 9, tease that Nick Newman (Joshua Morrow) will have a meeting with Devon Hamilton (Bryton James). At Society, they’ll discuss New Hope as well as Christian Newman (Alex Wilson) before talk turns to Chelsea Lawson (Melissa Claire Egan). Nick will confess that they broke up right as a stunned Phyllis Summers (Michelle Stafford) appears.

Phyllis will mistakenly assume Chelsea dumped Nick, but he’ll clarify that he instigated the split once Devon exits. Y&R spoilers say Phyllis will be glad Nick isn’t letting Chelsea jerk him around. They’ll be on the same page about this “Chadam” reunion not ending well due to Adam Newman (Mark Grossman).

After Nick and Phyllis reflect on the past, the conversation will shift to family. Phyllis will think Nick’s a great dad and an incredible person. Nick will mention that Cassie Newman’s (Camryn Grimes) birthday would’ve been tomorrow.

Nick will be grateful to Phyllis to letting him open up and will find out she’s still got her eye on the Grand Phoenix.

Nick will eventually start listing Phyllis’ positive qualities – like being smart, beautiful and fun. Phyllis will really want to focus on that fun part, so Nick will laugh about that sounding dangerous.

While Phyllis and Nick have their flirty chat, Chelsea will move the rest of her stuff into the penthouse. She’ll also listen as Adam takes a call from Connor Newman’s (Judah Mackey) principal.

After Adam schedules a meeting to talk about what’s best for their son, Chelsea will embrace him. She’ll praise Adam for being so protective and will feel like this is the man she fell in love with. Chelsea and Adam will express how much they’ve missed each other.

Once Chelsea shares her fears and makes Adam swear she won’t lose him again, Adam will convince her this is real. He’ll think they can build a happy life together. The Young and the Restless spoilers say Chelsea and Adam will head up to the bedroom, where they’ll strip down and make love.

At Crimson Lights, Rey Rosales (Jordi Vilasuso) will notice Sharon Newman’s (Sharon Case) acting a little off. She’ll cover by suggesting she’s just got so many things on her to-do list.

Rey will be apologetic about how busy he’s been lately. After Sharon kisses Rey deeply, she’ll mention that she wishes she could freeze this moment in time.

Later, Mariah Copeland (Camryn Grimes) will arrive and bring Sharon up to speed on Tanner Watts’ (Chase Coleman) awkward visit to the apartment. Once Mariah spots Devon, she’ll will speak with him about Tanner’s offer.

Devon will note that Tanner’s people reached out and preliminary negotiations are underway for Tessa’s tour.

Mariah will admit that Tessa used to be married to Tanner, but Devon will provide reassurance about everything working itself out. As Mariah’s leaving, she’ll bump into a worried Rey.

Ray will wonder if Sharon seemed OK to Mariah earlier. Mariah won’t have picked up on anything unusual, but she’ll appreciate Rey’s concern for her mom.

At home, Tessa will talk to Tanner over the phone about the complicated situation. When Mariah opens the door later, she’ll see candles lit and the table set for a romantic dinner. Mariah will wonder what they’re celebrating, so Tessa will remind her that her birthday’s tomorrow.

Tessa will reveal that she’s decided to go on tour with Tanner, but she wouldn’t do it if she thought it would break them. She’ll reiterate that her relationship with Tanner wasn’t about love. Tessa will insist she never knew what love was until she met Mariah.

After Mariah gives Tessa her blessing regarding the tour, she’ll suggest that they share one heart. They’ll make love on the sofa and afterward, Tessa will give Mariah an early birthday gift. Mariah will be taken aback when she realizes it’s Tessa’s diary.

Tessa will reflect on violating Mariah’s privacy by stealing her journal. Mariah will point out that they’re past all that, but Tessa will want Mariah to read and know her soul in the same way. An emotional Mariah will suggest she didn’t think it was possible, but she loves Tessa even more.

Of course, we should note that Tessa is set to appear in more episodes later this month and in February, so this tour is a story rather than an exit. There’s also the matter of Sharon’s looming diagnosis, so it’ll be interesting to see how that shakes things up for “Teriah.”

Speaking of that diagnosis, Sharon will take steps to get it on Thursday. She’ll receive some important news from her doctor after her mammogram.

Since the results were inconclusive on whether the lump was solid or fluid, Sharon will learn more info is needed from her ultrasound. She’ll eventually learn the lump is solid, so a biopsy will be recommended.

A little later, Sharon will stand outside the coffeehouse and read paperwork about what to expect at her core needle biopsy.