The Young and the Restless Spoilers: Thursday, June 11 – Daisy In Labor & On The Run – Sharon Has Bad News For Adam 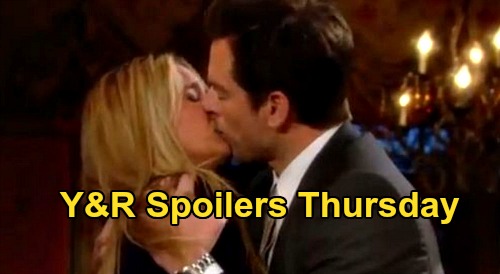 The Young and the Restless spoilers for Thursday, June 11, tease that viewers will see an encore episode that originally aired on December 30, 2010. The episode will begin as Daniel Romalotti (Michael Graziadei) calls Abby Newman (Emme Rylan), saying he’s on his way to meet her at Jimmy’s. Daniel will leave Daisy Romalotti (Yvonne Zima) at the apartment with her ankle monitor activated. Daisy won’t be amused.

Meanwhile, over at Crimson Lights, Kevin Fisher (Greg Rikaart) will speak briefly with Jana Hawkes (Emily O’Brien), who will be anxious to meet up with him later at the New Year’s party at Jimmy’s. Jana will then take off.

Chloe Mitchell (Elizabeth Hendrickson) will come in next and want Kevin to accompany her to the party. Kevin will say no, that he doesn’t want to be Chloe’s sidekick anymore. Chloe will think that Kevin will be spending New Year’s Eve alone, but Kevin will indicate otherwise when a woman named Alison arrives and Kevin kisses her. Chloe will get miffed and leave.

Next, Daniel will arrive at Jimmy’s and meet up with Abby, while Jana heads over to the apartment to see Daisy. Jana will say that she changed her testimony with the police, and that Daisy will likely go free soon. The two ladies will also talk about Jana’s plans later with Kevin. Suddenly, Daisy will have stomach pains, and she’ll clearly be in labor.

Daisy won’t want to leave the apartment for fear of being arrested, but Jana will be thinking of what’s best for the baby. Jana will call Daniel saying that Daisy’s in labor. Daniel will say that he’ll take care of the ankle monitor. Abby will tell Daniel that she’ll go to the hospital with him.

Over at the Chancellor Mansion, Chloe will arrive home and talk to Esther Valentine (Kate Linder), who will hear about Chloe’s woes with Kevin. Chloe will complain about what Kevin said earlier, and later Esther will find Chloe in her PJs eating ice cream and feeling glum. After some reminiscing about Kevin, Chloe will jump out of bed and race out of the mansion in her PJs.

At Jimmy’s, Kevin and Alison will show up and speak with Daniel and Abby before they head to the hospital. Kevin will inform Daniel that he’s changed his mind about adopting Daisy’s baby. Daniel will be glad to hear that, and the men will embrace.

As the evening progresses, Kevin will try to have a good time with Alison, but his mind will clearly be on Chloe. Kevin won’t be able to help but talk about Chloe, and Alison will wonder if Kevin’s in love with Chloe. Kevin will deny it, but the date will be ruined. Kevin will take off and outside he’ll see Chloe from afar wearing PJs.

Chloe will rush over to Kevin and tell him that she needed to see him before midnight, and she’ll proceed to tell Kevin that she needs him, and that he’s her “Ducky.” That will irk Kevin, who won’t be interested in being her best friend.

Chloe will insist that Kevin is everything she wants in a man plus he’s her best friend. Chloe will beg Kevin to say what he’s feeling, and he’ll blurt out that he wants her. Chloe will say the same, and they’ll kiss passionately.

Over at the jail, Adam Newman (Michael Muhney) will talk with Leslie Michaelson Shelby (Angell Conwell). Adam will say that Sharon Newman (Sharon Case) found Skye Newman (Laura Stone) in Hawaii. Adam will be in good spirits, and he’ll ask Leslie if Sharon can visit with him once her flight gets into Genoa City.

At the airport, Jack Abbott (Peter Bergman) and Phyllis Summers (Michelle Stafford) will bump into Sharon as they’re on their way to New York City. Sharon will fill Phyllis and Jack in on what happened when she went to look for Skye in Hawaii, including that Skye fell into a volcano and died.

Phyllis will scoff, thinking that it’s totally unbelievable, and Jack will be skeptical as well.

Elsewhere, Daisy and Jana will be in the car together bickering, as Daisy won’t want to go to the hospital and end up back in jail. Jana will decide to drive by Jimmy’s to tell Kevin that the baby is on the way.

However, when Jana pulls up to Jimmy’s, she’ll see Kevin kissing Chloe by the street. Jana will decide that she doesn’t care anymore, and she’ll instruct Daisy to run away and take the baby.

Jana will say that she’ll be glad that everyone will live in terror with Daisy on the run. Jana will get out of the car, and Daisy will drive off.

Back at the jail, Sharon will come to see Adam, and she’ll feel like she has failed him since he couldn’t bring Skye back with her. Sharon will tell Adam about Skye’s fate, and Adam will worry that it could be a setup on Skye’s part, but Sharon will say that Skye’s really dead.

Adam will reassure Sharon that everything will be ok, and that 2011 will be better for them.

Thursday’s episode of Y&R is going to be fantastic, so be sure to stay tuned to the CBS soap! And remember to keep CDL at the ready for all your soap updates. We’ve got all the latest Young and the Restless spoilers and news right here!