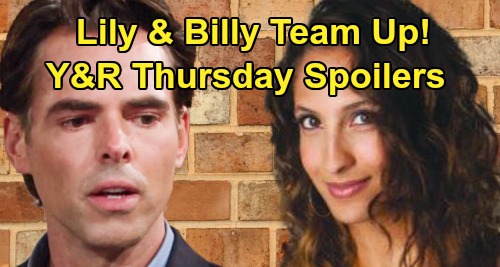 The Young and the Restless (Y&R) spoilers for Thursday, March 12, tease that Billy Abbott (Jason Thompson) will have some good news to pass along. Y&R fans know Jill Abbott (Jess Walton) pushed Billy to head up her new media division at Chancellor Industries. Billy initially balked since it sounded like something Jill made up to keep him busy, but she insisted it was a legit offer.

Jill’s hoping to stay relevant and go up against Newman Enterprises in new ways, so Billy will ultimately rise to the challenge. He’ll let Jill know he mulled over the offer and decided to accept it. The Young and the Restless spoilers say Jill will be ecstatic. She’ll be excited to welcome Billy aboard, but there’ll be a catch.

It turns out the offer is no longer for a solo gig! If Billy wants to run this media division, he’ll have to team up with someone surprising. The Young and the Restless spoilers say Jill will reveal the other person she has in mind – and it’s Lily Winters (Christel Khalil). That’ll certainly leave Billy taken aback, but Jill will insist they’re going to be the perfect business duo.

Jill knows Billy can be a wildcard, but she likes his ideas. She’ll view Lily as someone who can rein Billy in if he goes too far. Jill will also think Lily brings another perspective to the table. Lily’s a friend that Billy trusts, so Jill will want them to join forces and make this media division the best it can be.

The Young and the Restless spoilers say Lily will pop up again this Friday, so she may sign some contracts along with Billy and work on their joint vision. Naturally, a partnership like this will bring plenty of opportunities for clashing. Y&R viewers will definitely be eager to see where this arrangement leads.

Meanwhile, Nick Newman (Joshua Morrow) will meet up with Phyllis Summers (Michelle Stafford). They’ll both be facing a war between the head and the heart. Although they know sleeping together is a bad idea, they just can’t seem to help themselves. There’s a strong connection between these two – a magnetic “Phick” pull that’s tough to resist.

In Thursday’s episode, The Young and the Restless spoilers say Nick and Phyllis will surrender to temptation once again. They’ll swear it’s the last time, but no one’s buying that! Phyllis and Nick just might be on the verge of a full-fledged “Phick” reunion. We’ll give you updates as these friends with benefits inch into romantic territory.

It sounds like some great scenes are on the way. As other updates become available, don’t miss all the latest news here at CDL. Stick with us for more Young and the Restless spoilers and shockers.