BY Heather Hughes on March 4, 2020 | Comments: one comment
Related : Soap Opera, Spoiler, Television, The Young and the Restless 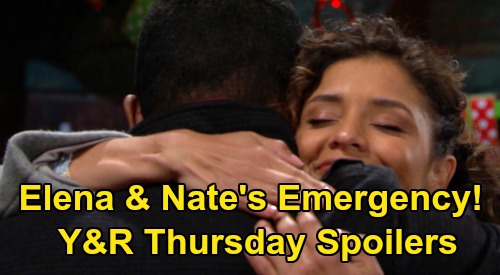 The Young and the Restless (Y&R) spoilers for Thursday, March 5, tease that an SOS call will come in for Nate Hastings (Sean Dominic) and Elena Dawson (Brytni Sarpy). They’re stuck waiting out the storm at the new clinic with Devon Hamilton (Bryton James), who’ll certainly pitch in if there’s anything he can do. This may be something the medical professionals need to handle from the sound of it.

Whatever the case, a young man named Jared (Michael Maclane) will find himself facing an emergency. You can bet Nate and Elena will pull off quite a rescue. By the end of all this, they should be reminded of why the new clinic’s so important.

Devon, Elena and Nate will all be proud to serve those in need. This clinic should make a real difference to many grateful people in the community.

As for Devon, he’ll also make a confession during Thursday’s episode. While they hunker down, Devon will open up about something that’s been on his mind. No matter what that is, Nate and Elena will have his back. They’re always a good source of support, so they’ll listen and offer advice if need be.

Other Young and the Restless spoilers, news and updates say Billy Abbott (Jason Thompson) will console Amanda Sinclair (Mishael Morgan). He’ll pull Amanda closer again as they connect in her suite, but how far will their bond go?

Now’s the time to reexamine their relationship and see exactly what they want this to be moving forward. We’ll see if it becomes more than a friendship or if it’s just too complicated.

Y&R spoilers have been messy due to this LONG night in Genoa City. The ice storm means the show’s juggling a lot of different plots, so certain things are taking a while to play out. However, Chloe Mitchell (Elizabeth Hendrickson) experiences what she believes are contractions in Wednesday’s episode. Potentially going into labor is awfully important, so let’s hope Y&R will continue this story on Thursday!

Of course, we have to wonder where poor Tessa Porter (Cait Fairbanks) is. She surely couldn’t get back on a plane in this kind of weather, so she must be off all alone somewhere feeling heartbroken and betrayed. Y&R rarely tells “Teriah’s” story from Tessa’s perspective, but it’d be nice to get see her side of this situation at some point.

On a happier note, Chance Chancellor (Donny Boaz) and Abby Newman (Melissa Ordway) will do what they do best and keep steaming up the screen. More lovemaking’s on the way, including a hot hookup in the shower by the end of the week.