The Young and the Restless Spoilers: Tracey Bregman And Christian Le Blanc Chat With Fans During Instagram Live Session

BY Sean O'Brien on May 28, 2020 | Comments: Leave Comments
Related : Soap Opera, Spoiler, Television, The Young and the Restless 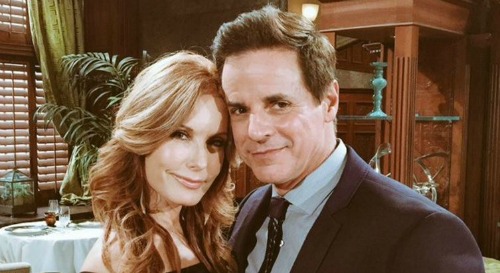 The Young and the Restless spoilers document that Tracey Bregman (Lauren Fenmore Baldwin) and Christian Le Blanc (Michael Baldwin) were on Instagram Live while a classic 2005 Y&R episode was airing. That repeat show was part of a villains theme week, with Sheila Carter (Kimberlin Brown) and Tom Fisher (Roscoe Born) kidnapping Lauren on a boat that Michael was watching from the beach during Likey’s honeymoon. The boat exploded at the end of the episode, with Le Blanc offering a perfect reaction shot.

Of course, the longtime Y&R colleagues haven’t seen each other since production was shut down in mid March due to the COVID-19 virus pandemic response.

Le Blanc has allowed his hair to go partially gray, while also also growing a beard and moustache, led with self-deprecating humor and offered a compliment to his co-star saying, “We all agreed that I’ll come in looking like Grizzly Adams and Tracey comes in looking stunning.”

Bregman replied saying, “No, you look great, babe. I’m so happy to see your face.”

Then, they began interacting with fellow Instagram users while the Y&R episode aired.

Le Blanc hosted the Instagram Live session on his account, where he has ninety-seven thousand five hundred followers. Bregman, who has two hundred and eighty-nine thousand followers, joined him. This was the latest online event that was promoted by Y&R to provide fans with a form of new content while repeat episodes air airing.

Fans asked a number of questions and offered compliments during the interactive chat. Personal friends of each actor and some former cast members sent messages as it proceeded. Sean Carrigan (Ben Stitch Rayburn) said hello, along with an actor who played one of Y&R’s greatest villains.

Young And The Restless Spoilers – Why Didn’t Eric Forrester Tell Lauren That Sheila Carter Is Alive?

The actors responded to a question that focused on Lauren’s all-time nemesis, Sheila.

The question said, “Do you think Eric should have called Lauren when Sheila reappeared in LA a few years ago on B&B?

Brown returned to The Bold and the Beautiful in 2017, with Sheila last being seen in that fictional version of Los Angeles, California, in 2003.

Lauren was assuming that Sheila was locked in prison during that period in the 2005 plot. But she’d escaped. As viewers know, Brown last played Sheila in 2006. Michelle Stafford (Phyllis Summers) eventually played a dual role, with Sheila’s plastic surgery making her look exactly like Phyllis. That version of Sheila was believed to have been killed in 2007.

Brown was following the live chat and sent some messages to her former colleagues as it proceeded.

Young And The Restless Spoilers – Long Track Records Of Success

Bregman’s first break in show business came in an uncredited role in the 1978 television movie Three on a Date. That was also the year she was first cast on a soap opera, as Bregman played Donna Temple Craig on Days of our Lives from 1978-1980. Along with many other credits in her career, the actor was cast as Lauren on Y&R in 1984. She earned a Daytime Emmy award for her role the next year. Her character first crossed over to B&B in 1993.

Le Blanc’s first acting job came in 1986, when he appeared in the television show Riptide. He was first cast in a soap in 1983, when he played Kirk McColl on As the World Turns. Along with other credits, he was later cast as Michael on Y&R in 1991. He’s earned three Daytime Emmy awards for that role.