BY hellodrdavis on February 25, 2020 | Comments: one comment
Related : Soap Opera, Spoiler, Television, The Young and the Restless 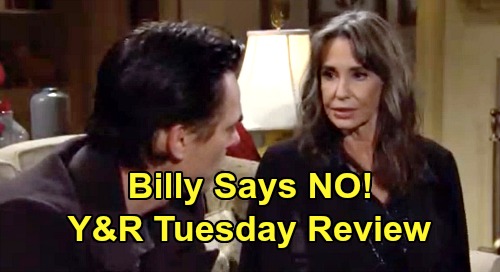 The Young and the Restless spoilers review for Tuesday, February 25, tease that Phyllis Summers (Michelle Stafford) will talk with someone on the phone from Crimson Lights, telling the person on the other end that they needed to take a stand, and that they were harmed emotionally. She’ll go on to say that they need to call out negligence to bring about change in the world.

Meanwhile, across the room, Amanda Sinclair (Mishael Morgan) will be speaking with Rey Rosales (Jordi Vilasuso) when Billy Abbott (Jason Thompson) walks in. Amanda and Billy will speak privately, arguing about whose fault it was that Victoria Newman (Amelia Heinle) was stabbed.

Amanda will lash out, saying that Billy should have listened to her weeks ago about talking with Victoria – and maybe none of this would have happened if he had. She’ll finally have enough and tell him “no more” before leaving in a huff, passing Devon Hamilton (Bryton James) and Elena Dawson (Brytni Sarpy) on the way out.

Next, at Society, Mariah Copeland (Camryn Grimes) will lament to Lindsay (Kirby Bliss Blanton) at the bar about meeting with a job recruiter, when Theo Vanderway (Tyler Johnson) comes along and inserts himself into the conversation. Mariah won’t be having it, but Theo will persist, saying that Mariah could speak with Summer Newman (Hunter King) about a job at Jabot.

Then, Theo will needle Mariah about possibly working for Tanner Watts’ (Chase Coleman) people, pointing out that his social media strategy is on point – a case in point being the new picture of Tanner and Tessa Porter (Cait Fairbanks) posted earlier. Mariah will take a look, and it will look a little too close for her taste.

Later, Mariah will video chat with Tessa from a table, and Tanner will suddenly pop on the screen shirtless. Marian won’t be amused, and Tanner will reference the picture that Theo showed Mariah earlier, noting that followers are calling them “rock’s new power couple.” Tanner will then pop off the call, and Mariah will ask Tessa why Tanner was half dressed.

Mariah will then go back to the bar and Theo will needle her, while Lindsay suggests they go to another bar to get a drink. Mariah will agree, and she and Lindsay will leave while Mariah ignores a call from Tessa and Theo looks on inquisitively.

Meanwhile, on the new episode of Y&R on Tuesday, February 25th, Abby Newman (Melissa Ordway) will have a strategy for handling Phyllis. She’ll suavely offer Phyllis three times what her shares in the Grand Phoenix are worth. Phyllis will balk, and Abby will needle her about this being a limited time offer.

Suddenly, Abby will get served with a lawsuit by someone claiming to have PTSD from he Simon Black (Jeffrey Vincent Parise) hostage incident. The person will claim to have migraines and missed days of work due to the stress of the event. Phyllis will calmly note that Abby could just fork over her shares to Phyllis and be rid of the whole problem, leaving Abby stunned.

Finally, Billy will show up at the Chancellor mansion for a visit with Jill Abbott (Jess Walton). Billy won’t really be in the mood for a talk, and he’ll proceed to berate himself, which will sadden Jill. He’ll tell her that “this is as good as it gets” and that he’s sorry. Jill will tell him that his family is here for him, which won’t really comfort Billy much.

Jill will then broach the issue of a job – she’ll have the perfect job for him, to run the media division at Chancellor. She’ll talk it up, but Billy will balk, saying that this isn’t a real job offer, it’s just a life preserver that she’s throwing at someone who’s drowning. Billy won’t go for it, and he’ll ultimately tell his mom that he just can’t do this right now – he just has to function for the kids. He’ll kiss her before taking off, leaving her distressed and standing alone at the mansion.

It sounds like a lot of Y&R action is heating our way on Tuesday, so stay tuned! Stick with the CBS soap and don’t forget to check back with CDL often for the latest Young and the Restless spoilers, updates, and recaps.