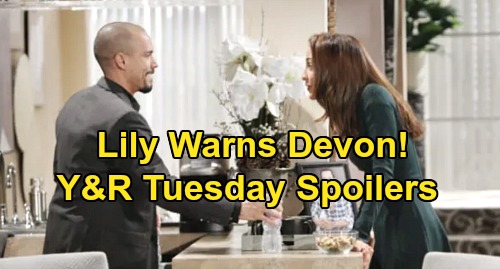 The Young and the Restless (Y&R) spoilers for Tuesday, January 14, tease that a big comeback is on the way. Y&R fans can expect Lily Ashby (Christel Khalil) to return for a visit, so she’ll undoubtedly catch up with Devon Hamilton (Bryton James).

In Monday’s episode, Devon finally admits that his Amanda Sinclair (Mishael Morgan) fixation is about more than just the will scam. He’s been obsessed with Amanda because she looks just like Hilary Hamilton (Mishael Morgan). Elena Dawson (Brytni Sarpy) understands and supports Devon after that confession, so he may come clean to Lily on Tuesday, too.

However, Devon knows Amanda’s hiding things and feels she could’ve been in cahoots with Colin Atkinson (Tristan Rogers). He won’t think the reason for his fixation affects who Amanda is or her true motives. In other words, Devon may be gunning for Amanda for all the wrong reasons, but he won’t think that means she’s innocent.

The Young and the Restless spoilers say Devon will stand his ground on Tuesday. Lily might surprise Devon by defending Amanda, especially if she gets the scoop on this restraining order situation. Perhaps Lily will think Devon’s jumping to conclusions without having all the facts – and he certainly is.

Amanda faced terrible abuse, so she’s a victim and doesn’t deserve to be hounded. Lily may advise Devon to back off since he can’t be sure of what Amanda was up against. Sadly, that’s probably not something Devon’s willing to do.

Besides, Devon’s already got “Chance” Chancellor (Donny Boaz) keeping tabs on Amanda. He’ll be eager to see what Chance might uncover.

Victoria will stumble across a dive bar receipt in Billy’s coat pocket and find it odd that he’d go to such an out-of-the-way spot.

When Victoria asks Billy about the receipt, Billy will lie about it. He’ll claim he just meet a client there, but Victoria will immediately sense that’s not true. It won’t be long until Victoria tracks down Nikki Newman (Melody Thomas Scott) and asks for guidance.

They’ll debate whether Billy’s gambling again, but Victoria will have a hunch her almost hubby’s problems run deeper than that.

Nikki will suggest they have to tackle their relationship issues head-on. She’ll urge Victoria to confront Billy about the real story behind this receipt. Nikki will think honesty is the best policy, but it could also stir up plenty of drama!

Billy will eventually confess that he’s been confiding in Amanda, but he’ll insist they’re just friends. Even so, Victoria may battle affair fears. Who wouldn’t since Billy’s initial reaction was to lie?