BY Heather Hughes on January 20, 2020 | Comments: one comment
Related : Soap Opera, Spoiler, Television, The Young and the Restless 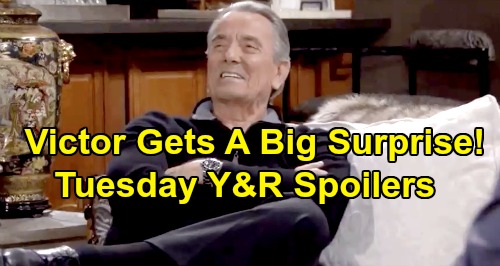 The Young and the Restless (Y&R) spoilers for Tuesday, January 21, tease that Elena Dawson (Brytni Sarpy) will run into Amanda Sinclair (Mishael Morgan). Y&R fans know Elena and Amanda made peace, that doesn’t mean Elena’s letting her guard down. In fact, Elena feels like Amanda could be dangerous.

Elena was concerned over the info in Devon Hamilton’s (Bryton James) dossier, so she’s definitely keeping an eye on Amanda. The same goes for “Chance” Chancellor (Donny Boaz), who was hired to spy on the secretive attorney.

While Devon keeps waiting for Chance to score some dirt, Elena will put on a smile and pretend everything’s fine. She’ll try to be cordial – perhaps in hopes that Amanda will slip up.

Will Amanda appreciate Elena’s kindness or see right through it? Amanda’s nature is to be distrustful, so it may be the latter. Regardless, Y&R spoilers say Amanda won’t be spilling secrets to Elena anytime soon.

Nikki Newman (Melody Thomas Scott), on the other hand, will indeed have something to spill. She’ll have a stunning announcement for her loved ones – and it’s sure to blow them away!

Previous Young and the Restless spoilers pointed to this shocker happening on Monday, but updated info now lists it for Tuesday, January 21. Fortunately, it’ll be just as shocking a day later!

This may involve the 40th anniversary celebration that’s ahead for Eric Braeden (Victor Newman) in February. A swanky gala is coming up in Genoa City, so Nikki’s surprise may involve a way to honor Victor.

As for Victor, he’ll be busy working on a new plan. There’s no word yet on exactly what that plan entails, but there’s a good chance it’ll tie in with his family. Victor’s all about the fam now that he’s retired.

Since Adam Newman (Mark Grossman) is getting most of Victor’s attention these days, Victor may cook up something that helps him.

Adam’s looking to get Dark Horse back up and running, so Victor might provide assistance. It would be a great project to occupy Victor’s time.

It would also help Adam leave a legacy for Connor Newman (Judah Mackey), which is his goal with this Dark Horse revival. Victor can certainly understand the value of that.