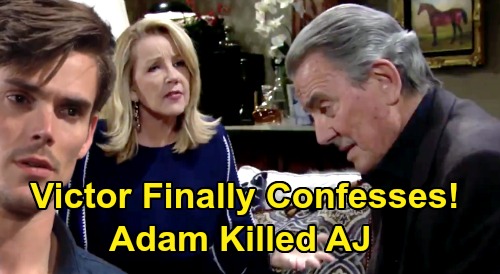 The Young and the Restless (Y&R) spoilers tease that Victor Newman’s (Eric Braeden) secrets will leave Nikki Newman (Melody Thomas Scott) nervous about what the future holds. There was a time when Nikki might’ve turned her back on Victor over schemes and mistakes, but those days are long gone. Nikki seems to have accepted her fate, which is a loving a flawed, complicated man.

That’s why Nikki can’t understand why Victor won’t just tell her the truth about what happened in Kansas. Victor confirmed that he had nothing to do with AJ Montalvo’s death, so Nikki’s wondering what her husband’s plans are. Although Nikki knows Victor will do whatever it takes to protect their family, she doesn’t know what that really means.

Nikki just wants to give Victor her full support and prepare for this ugly battle. Unfortunately, Nikki can’t do that until Victor reveals the secrets he’s keeping – and there could be two big ones.

The Young and the Restless spoilers say Nikki will keep revving up the pressure in the weeks ahead. Victor will stonewall Nikki as best as he can, but Nikki can be awfully persistent.

Since Victor knows Nikki has his back and will hopefully keep quiet, he’ll ultimately crack. The Young and the Restless spoilers say Victor will stun Nikki with a confession. Nikki will listen as Victor comes clean – presumably about what actually went down in Kansas and how he intends to handle Adam.

Did Adam kill AJ when he was younger and block out the memory? That’s looking more and more likely since Adam’s so sure Pops is guilty. They seem to be setting the stage for Adam to be guilty himself.

However, that doesn’t rule out the idea of Victor claiming Adam’s not a Newman and offering bogus evidence to back it up. Victor doesn’t seem keen on exposing Adam’s actions – and that may be partly for Connor Newman’s (Judah Mackey) sake.

Poor Connor’s already lost so much time with his father. The last thing Connor needs is to watch Adam head back to prison.

Even so, Victor needs a way to put Adam in his place and protect the family. If Adam’s guilty, why didn’t Victor just spin this blackmail plot around on him right then and there?

That doesn’t seem to be the plan Victor has in mind. Although Victor’s furious with Adam, he may want to spare Adam from the knowledge of what he might’ve done to AJ – whether it was truly murder or an accident.

Instead, Victor may want to push Adam out of the Newman clan completely. He could do that with phony paternity proof. That lines up with all Adam’s talk about being more like his father than his siblings.

Victor may want to strip away Adam’s Newman identity and make his son question everything about himself. It’d be a fitting punishment since Adam thinks he’s got this all figured out.

Naturally, the whole truth should be exposed to Adam sooner or later, but Victor will simply make his shocking admission to Nikki for now. It’ll be interesting to see how much Victor admits – or at least how much Y&R fans hear! The Young and the Restless could keep the mystery going a bit longer if they have Victor explain everything offscreen.

As other Y&R news emerges, CDL will have other updates to pass along. It sounds like this storyline’s heating up, so don’t miss what’s coming up. Don’t forget to check back in often for sizzling Young and the Restless spoilers, updates and news.