The Young and the Restless Spoilers: Victoria Deserves Hot Hookup After Billy Split – Brandon or A New Hunk? 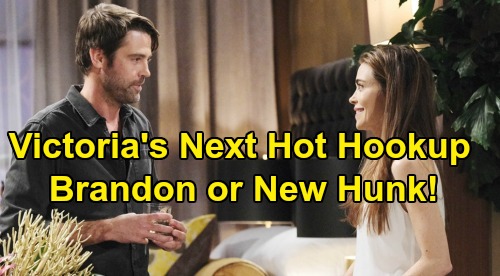 The Young and the Restless (Y&R) spoilers tease that Victoria Newman (Amelia Heinle) is headed for a breakup, but that could mean she’s headed for a fresh start, too. Goodness knows she deserves one after dealing with all this Billy Abbott (Jason Thompson) drama!

Some fans may disagree, but Billy has arguably been the worst-written Y&R character lately. He’s just not likable in his current state.

Billy’s internal monologues have offered a glimpse into his thoughts, but those thoughts have been strange and selfish. He feels like Victoria always sees him as someone broken and in need of fixing, but why wouldn’t she?

As Victoria pointed out, it wasn’t that long ago that Billy tried to run down Adam Newman (Mark Grossman).

Let’s really think about that for a moment. Billy tried to MURDER a man because his alternate personality took over. If there was ever someone who needed to stick to therapy, it’s Billy.

Victoria’s demand seems reasonable considering Billy’s deadly efforts happened just a few months ago. Contrary to how the show tried to portray it, dissociative identity disorder isn’t something you can just decide you don’t have anymore.

Even putting all that aside, Billy has become quite self-centered. It’s all about him and what he wants when he has a whole family to consider.

When Billy was staying quiet about his inner battle, he asked if Victoria knew how much he loved her. Victoria replied that he proved it every day. Billy’s thoughts suggested Victoria should tell him he didn’t have to.

Come on! It’s not outrageous to want your partner to show you love. This is a basic part of any relationship. It feels like Billy is complaining about things that don’t need to be complained about.

We can’t forget how Billy grumbled about Victoria’s sweet surprise for Christmas. She just wanted to take a nice trip to Telluride with the fam, but Billy had to gripe about how he’d prefer the beach and something with more people around. Why? Because it’s all about Billy!

Billy wants to make Victoria out to be some old nag, but the reality is he shut her out. This turned into a huge issue because Billy wouldn’t communicate with Victoria.

Billy turned to Amanda Sinclair (Mishael Morgan) instead, but he kept their bond a secret and later lied about it. These are problems that Victoria has every right to be upset about.

Billy seems poised to get together with Amanda eventually, but what’s next for Victoria? Perhaps she should take some time for herself and maybe even have a fun fling.

Y&R fans will recall how Victoria went to Vegas last year after all the J.T. Hellstrom (Thad Luckinbill) drama. Victoria pretended to be “Jeni” and had a good time with rocker Brandon Rose (Mitch Eakins).

Maybe Victoria needs to let loose once again! It’d actually be an interesting idea for The Young and the Restless to send Victoria back to Vegas. Something big happened there that Adam and “Chance” Chancellor (Donny Boaz) would like to forget.

It’d be nice to see some movement in that storyline, so a Vegas trip for Victoria could help with that. If she tracks down Brandon, that’d be even better.

However, Victoria could undoubtedly score a hot hookup in GC or even something that could lead to a stable, loving romance. Whatever the case, The Young and the Restless spoilers say Victoria and Billy are headed for Splitsville – and that honestly seems like great news for Victoria in the long run.

Would you like to see Victoria have a fling? Should Y&R bring back Brandon or perhaps give Victoria another hunk to get steamy with? We’ll give you updates as other Y&R details emerge. Stay tuned to the CBS soap and don’t forget to check CDL often for the latest Young and the Restless spoilers, updates and news.