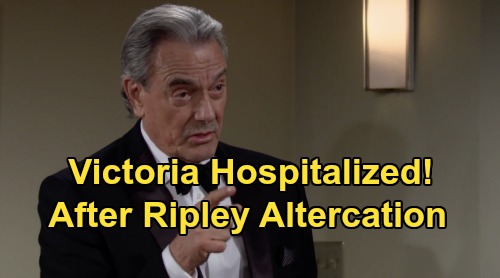 The Young and the Restless (Y&R) spoilers reveal that Eric Braeden (Victor Newman) has been celebrating his 40th anniversary with the CBS soap – and the best is yet to come! Y&R fans have been hearing about Newman Enterprises’ 50th anniversary gala, which Nikki Newman (Melody Thomas Scott) wants to be more about Victor than the company.

There’s a good reason for that since this three-day extravaganza is really a celebration of Braeden and the fantastic role he’s brought to life. However, this gala will also serve as the backdrop for some hot drama! It turns out some new clues have surfaced about the chaos that’ll inevitably unfold.

Braeden recently had a fun behind-the-scenes event held in his honor. Cast members of the past and present came together to praise Braeden for his amazing run so far. Braeden’s TV daughters, Amelia Heinle (Victoria Newman) and Melissa Ordway (Abby Newman) showed a hilarious blooper reel – and one of those bloopers was from a scene that hasn’t yet aired.

The clip features the Newmans in the hospital waiting room, where Victor has a faceoff with Paul Williams (Doug Davidson). This lines up with Young and the Restless spoilers for February sweeps, which pointed to Paul investigating a shocking crime – one that involves many of the key players in town.

We should also point out exactly which Newmans are in this clip. Abby, Victor, Nikki, Nick Newman (Joshua Morrow), Adam Newman (Mark Grossman) and Chelsea Lawson (Melissa Claire Egan). Notice which Newman isn’t in that group: Victoria. That could be significant for a few reasons, but especially the one we’re about to mention.

“By the way, Paul, Billy Abbott that useless son of a bitch has as much to do with this as that Ripley Scott or whatever,” Braeden says before the room erupts in laughter. He tries the take a couple more times, but he struggles to get through without flubbing. It’s certainly funny to see Braeden laughing with his fellow cast members, but the tone of the actual scene is quite serious before the blunder.

Now if Amanda were hurt and hospitalized, there would be no need for all these Newmans to show their faces. Most of them don’t even really know Amanda. Victoria, however, is the link that connects them all. We should also point out that Victoria’s had some boxing scenes with Victor recently. She’s been learning out to defend herself against punches, so that could be another hint.

There was even that ominous comment Victoria made about never letting anyone hurt her again – a tell-tale sign that Victoria would indeed get hurt again. Of course, the circumstances of all this aren’t entirely clear yet. It’s possible Victoria will simply get caught in the crossfire somehow or will be injured trying to protect Amanda.

It’s also possible Ripley will indeed go after Victoria to get back at Billy – perhaps to prey on Billy’s ex the way he thinks Billy’s preyed on Amanda. Victoria could face some sort of fall or other accident that isn’t directly Ripley’s fault but is still tied to an encounter.

Ripley asks Amanda if she’s in a relationship with Billy on February 11, so the jealousy groundwork’s there. Although Ripley’s been arrested as of that February 11 episode, it sounds like he’ll get out on bail and wreak havoc right as the gala wraps up.

Whatever the case, there are signs that Victoria may be hospitalized for something Victor blames both Ripley and Billy for. The Billy part will probably be because Billy and Amanda’s bond led to this nightmare.