The Young and the Restless Spoilers: Victor’s Not The Enemy, Adam Bonds With Dad – Billy & Alyssa Real Threats 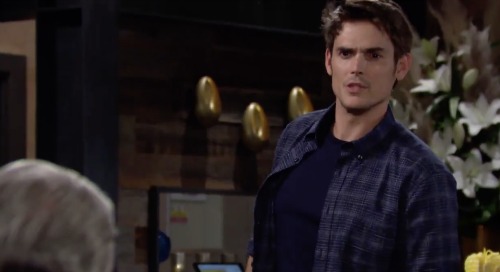 The Young and the Restless spoilers document that Chelsea Lawson’s (Melissa Claire Egan) desperate attempt to maintain Chadam is causing her to back a reckless plan. She fears losing the love of her life to Sharon Newman (Sharon Case) and is acting in response to that potentially genuine threat.

Adam Newman (Mark Grossman) is projecting his own insecurities in once again attacking his father. Victor Newman (Eric Braeden) was protecting him when he was eleven years old and is still defending his son now, though Adam’s ingrate nature blinds him to that fact.

Young And The Restless Spoilers – Bringing Down The Moustache

Why does Adam think that he needs to bring Victor down? It doesn’t make any sense. But that’s what his unbalanced mind has concluded.

What makes Adam’s decision dangerous is that Chelsea has chosen to go along with his latest amoral scheme, with whatever it proves to be. She’s serious, as is evidenced by her decision to send Connor Newman (Judah Mackey) to boarding school.

Y&R fans know that current protocols caused that child actor and others to be off the set, which makes Connor’s write-out understandable.

Young And The Restless Spoilers – Alyssa Montalvo Is The Threat

While Chadam is aiming at Victor an actual threat exists in another form. The man who shielded Adam from the consequences connected to the accidental death of A.J. Montalvo (Marcus DeAnda) isn’t the real issue. Instead, A.J.’s daughter’s vengeful attitude is the real problem.

Alyssa Montalvo (Maria DiDomenico) has it in for her ex-childhood friend. The boy she knew as Victor is not only responsible for the decade’s old death of her father, he used her this year in an attempt to pin the blame on Victor.

Yes, Adam didn’t initially know that he committed the act. But his cold manipulation of Alyssa overrides that fact and is driving her pursuit of an even more troubling story that’s based in Las Vegas, Nevada.

Young And The Restless Spoilers – Billy Abbott Is The Facilitator

Billy might be telling the truth in saying that he’s not mining a grudge. Delia Abbott (Sophie Pollono) isn’t coming back to life. Billy has also learned that it’s harmful to his soul to pursue retribution against Adam where Delia’s tragic death is concerned.

Similar to Alyssa, Billy is focused on Adam’s current actions. They’ve formed a classic unholy alliance, with the intention of exposing their common enemy to the masses. They don’t expect Adam to be jailed, but that would be a solid side benefit if it happens.

Chelsea wronged Billy when Egan’s character debuted on Y&R. That betrayal hasn’t truly faded, either, which makes the coming battle between Chadam and the duo of Billy and Alyssa worth the watch.

Adam needs to realize Victor is his ally ASAP – then join with his dad in destroying his enemies. There is no time to lose nor any energy to waste on father and son fighting.