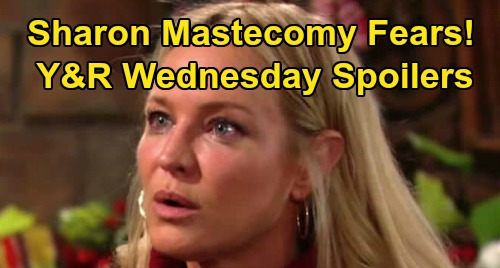 The Young and the Restless (Y&R) spoilers for Wednesday, April 1, tease that Phyllis Summers (Michelle Stafford) had better watch her back! Two schemers will be coming for Phyllis as Abby Newman (Melissa Ordway) and Chance Chancellor (Donny Boaz) hit town again. They’ll be back from their latest adventure and ready to focus on making Phyllis’ life miserable.

We should note that Y&R’s had some scheduling issues lately, which has been throwing off some Young and the Restless spoilers here and there. It’s something to keep in mind, but just know that Chance and Abby will put their plot in motion soon enough.

Phyllis is awfully caught up in her revived romance with Nick Newman (Joshua Morrow), so this is the perfect opportunity to strike.

Over with Theo Vanderway (Tyler Johnson), he’ll be working on a plan of his own. Unfortunately, that plan will flop big time! The Young and the Restless spoilers say Theo will do something with good intentions – at least on the surface. Theo’s motives are always up for debate, but it seems he may truly want to make Dina Mergeron’s (Marla Adams) final days a bit brighter.

Kyle Abbott (Michael Mealor) will be feeling protective of their grandmother, so he’ll ultimately get into a huge confrontation with Theo. Once Jack breaks this fight up, he’ll look at Kyle with a deep sense of betrayal.

Jack will be disappointed in his son for letting his feud with Theo spill over into such a sensitive area. Dina doesn’t need anything else to stress her out as she nears the end of her life.

Nevertheless, Kyle will be adamant that Theo was taking advantage of Dina to score brownie points with Lola Rosales (Sasha Calle). He’ll just hope Jack will see things his way eventually. Summer Newman (Hunter King) will take Kyle’s side and give him plenty of support as this hot plot heats up.

Within the next episode or two, Sharon Newman (Sharon Case) will also get the support she needs. Mariah Copeland (Camryn Grimes) recently decided to leave Tessa Porter’s (Cait Fairbanks) tour and come home right away.

Sharon and Faith Newman (Alyvia Alyn Lind) need Mariah as they prepare for Sharon’s upcoming scan, which will reveal if the tumor’s shrunk.

Of course, Sharon may be irritated with Mariah for bailing on her plans, but Mariah knows where she needs to be – and so does Tessa. They’re on the same page, so it looks like Sharon will relent and just appreciate having Mariah in her corner.

The Young and the Restless spoilers state that Sharon will confide her fears about the chemo not working. She’ll worry that a mastectomy may be necessary, but Mariah will assure Sharon that they’ll figure this out – no matter what those scan results say. They’re all in this together!

Y&R fans can expect some gripping scenes as Sharon gets her scan results later this week. We’ll keep you posted as other updates and news roll in. The Young and the Restless spoilers say Sharon still has a hard battle ahead of her, but it’s great that she’s got such an amazing support system. CDL will have other hot Young and the Restless spoilers, news and updates, so don’t forget to stop by often.