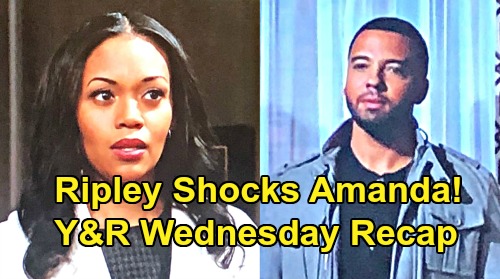 The Young and the Restless (Y&R) spoilers recap for Wednesday, February 5, teases that Kyle Abbott (Michael Mealor) will have Lola Abbott (Sasha Calle) on his mind. He’ll be wrapped up in all his marriage drama, so he’ll mistakenly tell the staff their point person is Lola. After Kyle clarifies that he means Summer Newman (Hunter King), he’ll make a joke out of the blunder and learn that Theo Vanderway’s (Tyler Johnson) left for the day.

At Society, Summer and Phyllis Summers (Michelle Stafford) will watch Lola sit down to chat with Theo. Summer will think this is why it’s OK to tell Kyle how she feels. Once Summer admits she confessed the San Francisco kiss to Theo, Phyllis won’t think Theo blabbed to Lola.

When it comes to Summer’s choice of dining establishments, Phyllis will encourage her to hang out somewhere else.

As for Lola, she’ll consider marching over to confront Summer, but Theo won’t think that’s a good idea. Over at the bar, Lindsay (Kirby Bliss Blanton) will praise Mariah Copeland’s (Camryn Grimes) amazing work on Tessa Porter’s (Cait Fairbanks) music video. She’ll assure Mariah that she won’t be out of work for long.

Mariah will get distracted by the Lola-Summer war brewing nearby, so she’ll walk over to stop things on Summer’s end. Summer won’t think this is any of Mariah’s business, but she’ll eventually agree to leave along with Theo.

Next, Kyle will have an honest discussion with Lola in the kitchen. Lola won’t think her situation with Theo is the same as the one Kyle’s dealing with, but she’ll want Kyle’s take on things.

Despite Kyle’s insistence that he’s fighting for their marriage, Lola will push him on what he said about Summer. He confessed that Summer was in his head, so Lola will want him to explain.

The Young and the Restless spoilers say the conversation will take an emotional turn as Kyle opens up. Summer asked questions that Kyle struggled to answer – and Summer’s not just in his head, she’s in his heart, too.

Although Kyle previously thought he was over Summer, he won’t be able to say the same now. Lola will be distraught over the blow. She’ll reflect on ending up like her mother and how she never wanted that to happen. Lola will suggest Kyle made her feel like they were meant to be.

A choked-up Kyle will hate causing pain, but Lola will admit she’s connected with Theo like Kyle has with Summer. She just wasn’t willing to let Theo in. After deciding that the marriage is over, Kyle will agree to book a hotel room.

Once Kyle’s gone, Lola will come out to find Theo waiting. She’ll acknowledge that her relationship’s done before urging Theo to stay. Lola could really use a friend to lean on, so Theo will smile and insist she’s got one.

Back with Kyle, he’ll look glum as he sits at the Grand Phoenix. Summer will join Kyle and take his hand tenderly. At Crimson Lights, Victoria Newman (Amelia Heinle) will cause her ex-almost hubby of being a liar. Billy Abbott (Jason Thompson) will wonder what he did now, but Victoria will fire back that it’s about WHO he did.

Amanda Sinclair (Mishael Morgan) and Nate Hastings (Sean Dominic) will be nearby as this confrontation heats up. Victoria will claim she has proof of the affair, so Billy will be left baffled. Once Victoria’s gone, Billy will address this bogus evidence with Amanda on the patio. He’ll think it’s exactly the kind of thing Victor Newman (Eric Braeden) would pull.

After Billy takes off, Amanda will talk to Nate about all the drama that’s happened since coming to town. Nate will believe Amanda’s side of the story, which only involves a friendship with Billy.

At the ranch, Y&R spoilers say Victor will give Victoria a pep talk and some advice. Victoria will make it clear nobody’s going to hurt her again. Back at the Grand Phoenix, Phyllis will insist she heard about the cheating. She’ll warn Billy about blowing up his life and dragging Amanda down with him.

Afterward, Phyllis will make sure Amanda’s all right. Amanda will be grateful for the concern, but she’ll promise she can handle this. Once Amanda returns to her hotel suite, she’ll be rattled to find Ripley waiting for her. Ripley will greet Amanda and tell her that it’s been a while.