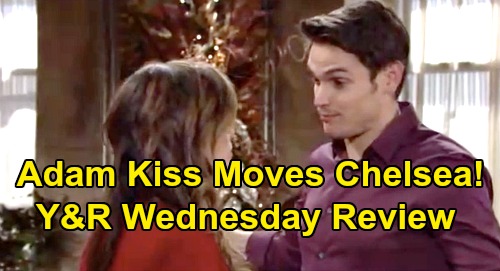 The Young and the Restless spoilers review for Wednesday, January 1, tease that Chelsea Lawson (Melissa Claire Egan) will surprise Nick Newman (Joshua Morrow) for his birthday. She’ll appear in his house with his favorite muffins from Crimson Lights and a gift – a framed picture of them along with Christian Newman (Alex Wilson) and Connor Newman (Judah Mackey), along with an empty frame for a future picture.

Eventually, the conversation will turn to Adam Newman (Mark Grossman), and they’ll enter familiar territory as they argue about Adam’s intentions. Nick will insist that Adam’s using the situation with Connor to draw Chelsea closer, while Chelsea insists that it doesn’t matter because she doesn’t want Adam. Nick will note that Adam is winning at keeping them apart. Finally, they’ll agree to see each other later at Abby Newman’s (Melissa Ordway) party at Society.

Chelsea will return to Adam’s penthouse, where Adam will show her all the cute toys he bought for Oliver, Connor’s new kitten. Adam will then show her a picture that Connor drew of them as a family. That will lead Chelsea to say that they need to talk about their living arrangements, since it is giving both him and Connor false hope for a happily ever after that’s never going to happen.

Adam will then surmise that she’s been to see Nick, since she always comes back different. He’ll remind her of how great Christmas was and say that they belong together. She’ll fire back that he has no idea what’s in her heart, and he’ll say that he does – that she’s afraid of breaking Nick’s heart and admitting that she loves him. Interestingly, Chelsea won’t deny that what Adam is saying is true.

Adam will then pull Chelsea into a kiss. She’ll kiss back, then pull away angrily, telling him that he can’t do that. She’ll gather her things hurriedly and he’ll note that he’ll see her at the party, which she’ll tell him not to crash. Adam will say that he won’t be crashing the party, since he was invited. Chelsea will leave upset, clearly rattled by the kiss and by Adam’s words, which she must know are true.

Meanwhile, at Crimson Lights, Nick will enjoy a birthday celebration with Faith Newman (Alyvia Alyn Lind) and Summer Newman (Hunter King). They’ll present him with more of his favorite muffins, and they’ll be talking when Phyllis Summers (Michelle Stafford) shows up and joins them. It will be established that Phyllis isn’t going to Abby’s party, and when Summer and Faith step away, Phyllis will give Nick his present – Brewers tickets.

Phyllis will then leave the girls with Nick and she’ll see Chance Chancellor (Donny Boaz) getting coffee at the counter. She’ll approach him, and he’ll wonder if one of her New Year’s resolutions is to stop hounding him about what happened in Las Vegas. She’ll say not a chance, and as soon as she learns that he’ll be at Abby’s party, she’ll decide to attend and will tell him that she’ll see him there.

Finally, at their home, Billy Abbott (Jason Thompson) will tell Victoria Newman (Amelia Heinle) that he won’t be attending the New Year’s party with her. She’ll be disappointed, but he’ll explain that he’s got to meet an executive coming in from Chicago about a merger. They’ll continue talking and Victoria will mention the year that she found Billy outside of Jimmy’s Bar.

She’ll note that Billy has really turned a corner, and he’ll wonder whether perhaps he’s just meant to be who he is – after all, they always tell the kids they don’t have to be perfect, and maybe that should apply to him, too. She won’t grasp what Billy’s saying, and she’ll wonder if there’s something he wants to tell her.

Victoria will wonder if Billy is gambling again, and he’ll say that it’s bigger than that – that he feels he needs more. She clearly won’t get what he’s saying, and she’ll go on about how he should tell her what he needs, and Billy will start to get overwhelmed, but he’ll say that talking to her made him feel better. As they embrace, Billy will look unhappy, and after she leaves, he’ll text Amanda Sinclair (Mishael Morgan) and ask her if she’s got any time to talk.