BY hellodrdavis on January 8, 2020 | Comments: 2 comments
Related : Soap Opera, Spoiler, Television, The Young and the Restless 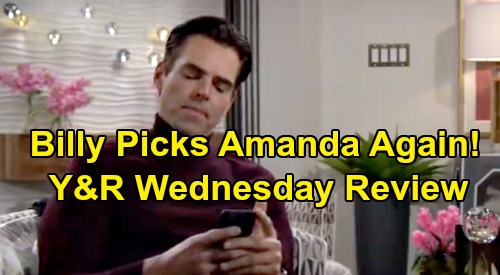 The Young and the Restless spoilers review for Wednesday, January 8, tease that Billy Abbott (Jason Thompson) will show up at the Grand Phoenix to meet with Chloe Mitchell (Elizabeth Hendrickson). As she greets Billy, she’ll remark that she’s glad to see him back to “the Billy they all know and love,” and Billy will privately wonder which Billy that is and who she’d like him to be this time.

Chloe will then share that Delia Abbott (Sophie Pollono) is going to have a little brother or sister, and Billy will be thrilled for her and Kevin Fisher (Greg Rikaart). He’ll note that Chloe seems happy and hopeful, and he’ll wonder what her secret is. She’ll say there’s no secret and that she still cries over Delia at times, but that Delia is her guardian angel now.

Chloe will ask how Billy is doing, and he’ll say that he’s over his anger with Adam Newman (Mark Grossman) and that he’s just a work in progress. Chloe will head across the room to see Chelsea Lawson (Melissa Claire Egan), leaving Billy pensive. He’ll nearly text Victoria Newman (Amelia Heinle), but then he’ll change his mind and text Amanda Sinclair (Mishael Morgan) asking her what’s up.

Chloe will happily tell Chelsea that she’s having a baby. Chelsea will be overjoyed for her friend, and Chelsea will have news for Chloe as well. Chloe will excitedly guess that Chelsea and Nick Newman (Joshua Morrow) are getting married, but Chelsea will quickly reveal that she and Nick called off their relationship.

Chelsea will then stun Chloe by saying that she and Adam are going to give their relationship another shot.

Chelsea will attempt to explain that Adam has changed, but Chloe will rattle off how Adam blackmailed Kevin into working for him, and how he tried to kill Victor Newman (Eric Braeden), and how he’s a sociopath. Chelsea will try to say how Adam has transformed and that he’s all about his family now, but Chloe won’t be having it.

Chloe will then drag Chelsea over to Billy and beg him to stop her from getting back together with Adam and get her out of her denial. Billy will calmly ask for a minute alone with Chelsea. He and Chelsea will sit down, and he’ll ask Chelsea what she really wants.

Chelsea will explain that she and Adam are simply exploring the possibility and taking things slowly, and that she can’t deny her feelings for him,

Chelsea will acknowledge that she and Adam had some dark chapters, and Billy will say that he thinks she’s right in her decision, and that “this is your life, you get to choose how to live it.” Chelsea will seem relieved, but later Chloe will be miffed with Billy for how he handled the situation.

Billy will tell her that people need to start living their truths. Chloe then asked, “Even when the truth is insanely wrong?” Billy will say that sanity is overrated and will go on his way.

So, it seems that Billy just wants to be himself, but he doesn’t know who he really is. The whole thing sounds very much like a mid-life crisis, although Billy seems a tad young to be going through that just yet.

At any rate, he’s certainly searching for something within himself to tell him who the “real” Billy Abbott is. But he only seems to be finding his real self when he’s with Amanda – something that could very well lead to an affair with her and quite possibly destroy his life with Victoria.

Meanwhile, on the new episode of Y&R on Wednesday, January 8, Adam will pay Victor a visit at the ranch. Victor will already have heard about Nick and Chelsea’s breakup from Nikki Newman (Melody Thomas Scott), and Adam will confirm that Chelsea and Connor Newman (Judah Mackey) are living with him permanently now.

Victor will get his digs in about Adam being Chelsea’s backup plan, and Adam will fire back some insults of his own. The men will spar in typical Newman fashion, and Adam will reveal that he’s there to talk about Connor.

Adam will say that he wants Connor to have a relationship with Victor, and that he wants his whole family to be invited on holidays just because Nick doesn’t want him there. Victor will smirk and reveal that he manipulated the situation so that Connor could go back to Walnut Grove, but Adam will say that he and Chelsea were exploring other options.

Victor will circle back around to Chelsea being a con artist and a thief, and that perhaps she shouldn’t be trusted to help build a solid foundation or Connor. Adam will fire back that Nikki’s past is far more scandalous than Chelsea’s.

Victor will balk at this, and the two will continue to enjoy sparring. As he’s leaving, Adam will reveal that he’ll break every rule in the book for his family if he has to, and Victor will wish him luck.

Later, Adam will be at the penthouse when Chelsea returns at the end of the day. They’ll talk about their day, almost seeming like a back-together couple. Adam will characterize his back-and-forth with Victor as “good.” They’ll get close and nearly kiss, but then Chelsea will walk away, leaving Adam deflated.