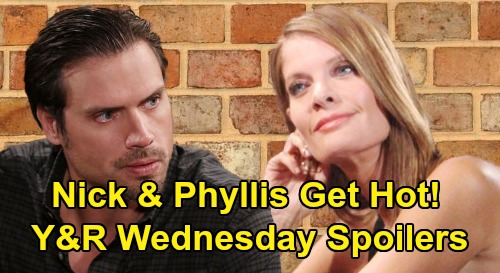 The Young and the Restless (Y&R) spoilers for Wednesday, March 4, tease that Chloe Mitchell (Elizabeth Hendrickson) will do something that leaves Kevin Fisher (Greg Rikaart) trapped. Since an ice storm is hitting Genoa City, perhaps that’ll play a role in whatever gets Kevin stuck. Regardless, it sounds like a situation that’ll lead to some cute and funny moments for these expectant parents.

Over with Michael Baldwin (Christian LeBlanc) and Lauren Baldwin (Tracey E. Bregman), they’ll also be holed up due to the icy weather. However, there shouldn’t be too many complaints!

The Young and the Restless spoilers say Lauren and Michael will make the most of this stormy night together. It’ll actually turn out to be a very romantic one, so that should be a real treat for fans of this couple.

Although it’s cold in Wisconsin, Y&R viewers can expect Michael and Lauren to turn up the heat. They’ll make love and celebrate the connection they share, so don’t miss Wednesday’s sweet scenes.

Across town, Jack Abbott (Peter Bergman) will spend some time catching up with Ashley Abbott (Eileen Davidson). He’ll be pleased Ashley made it in safely before the ice storm hit hard.

The Young and the Restless spoilers, news and updates say Jack and Ashley will discuss Dina Mergeron (Marla Adams), who’s rapidly deteriorating. It’s going to be a difficult goodbye, but they have to prepare for the inevitable. Ashley and Jack will be glad that they can lean on each other, but there could be some conflict to tackle, too.

It turns out Jack and Ashley have some unfinished business to contend with. Will that involve the merger and some details that weren’t locked in? Could this relate to Theo Vanderway (Tyler Johnson) instead?

It’s possible Ashley still has her eye on Theo for a position in Paris. He turned her down and accepted Jack’s offer, but that doesn’t mean Ashley won’t try again.

Whatever the case, Ashley and Jack have all night to hash things out. They won’t be going anywhere due to this brutal storm. The same goes for Nick Newman (Joshua Morrow) and Phyllis Summers (Michelle Stafford), who’ll wind up bonding by the roaring fire.

Will a hot hookup happen at Nick’s place? It seems likely under the circumstances, but we’ll see how it all plays out in Wednesday’s episode. As other details emerge, don’t miss all our Y&R updates. CDL’s your hotspot for Young and the Restless spoilers and news.