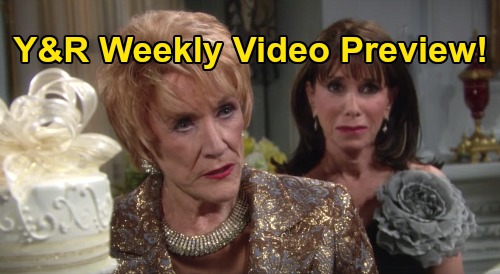 The Young and the Restless (Y&R) spoilers preview update for the week of April 27-May 1 teases that some fantastic episodes are coming up. Y&R’s got five fabulous shows lined up to celebrate “Katherine the Great.” This special theme week will honor Jeanne Cooper’s memory and highlight her incredible portrayal of Katherine Chancellor, who was one of Genoa City’s most adored and unforgettable characters.

Katherine will indeed prove why she’s great in these amazing blast-from-the-past episodes. The Young and the Restless will dip into the vault and go as far back as 1990. Some of Cooper’s finest moments will be featured as Y&R takes this trip down memory lane.

Naturally, there’ll be many other fan favorites in these episodes, but Katherine will be the star of the show! The Young and the Restless recently put out a fun promo, which offers a glimpse at some of the action. Y&R promises to celebrate the role that made Jeanne Cooper a legend – and what a legend she was!

This preview video includes Katherine and Jill Abbott’s famous cake fight, so fans will definitely want to tune in for that. Whether you’ve seen this faceoff before or not, it’ll be worth a watch. “You want a war, lady?” Katherine snarls to Jill in the promo clip. “Bring it on, old woman” Jill claps back.

Katherine responds by hurling a huge hunk of cake and icing right in Jill’s face. Jill returns the favor, leaving Katherine with a face full of cake as well. They keep smashing the frosted dessert all over each other, but other characters quickly move to intervene.

This episode will serve as an excellent example of what a fierce woman Katherine was, but she had a softer side, too. Katherine was just a great character all around – hence the name of this theme week. These “Katherine the Great” episodes will be wonderful reminders of the talent and feisty spirit Cooper brought to Y&R.

Next week #YR celebrates the role that made Jeanne Cooper a legend! 5 classic episodes with 5 epic performances.👏 Don’t miss “Katherine The Great” on @CBS! pic.twitter.com/ZISTlcyYCO