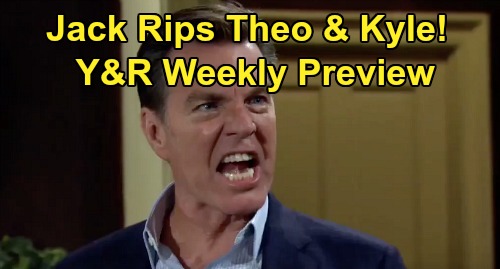 The Young and the Restless (Y&R) spoilers preview for the week of April 6-10 teases that we’ll see some fierce showdowns and bold moves. For starters, Jack Abbott (Peter Bergman) will be appalled over Kyle Abbott (Michael Mealor) and Theo Vanderway’s (Tyler Johnson) next round of battle. They’ll leave Dina Mergeron (Marla Adams) in distress thanks to their upcoming faceoff, so Jack will lay down the law.

Y&R’s weekly promo shows Jack shouting, “You fight in the office! You fight in public! ENOUGH!!!” Theo and Kyle will look ashamed of themselves, but they’ll still blame each other for the drama.

Jack will announce that things are going to change, so he’ll set up a Jabot board meeting. He’ll let Kyle and Theo squirm a bit as he makes them wait to learn their fates.

Once Kyle arrives a little early, he’ll confide in Summer Newman (Hunter King) and fret over what Jack’s going to do. Summer will argue that Jack probably had a chance to cool off, but Kyle will doubt it.

He’ll point out that Summer didn’t see Jack’s face and how betrayed he looked. Kyle will have a bad feeling about how this meeting’s going to play out.

After Theo shows up, he’ll join Jack and Kyle at the table. Jack may think this is an opportunity to hash things out, but he won’t let the cousins get away with their recent behavior. The Young and the Restless spoilers say Jack will insist that actions have consequences. He’ll argue that Kyle and Theo should get ready to face theirs!

You can bet Theo and Kyle won’t like Jack’s punishment, so we’ll see how they handle the lesson he’s teaching. Speaking of teaching lessons, it seems Victor Newman (Eric Braeden) will have a similar goal in mind.

At Newman Enterprises, Adam will let Victoria Newman (Amelia Heinle) know he wants the throne in exchange for keeping Victor out of prison. After Adam exits, Victor will give Victoria some news that viewers aren’t privy to just yet. Of course, that leaves the door open for a secret plan – one that’ll let Adam think he’s won only to be brought down later.

As for Nikki Newman (Melody Thomas Scott), she’ll be stunned by Victoria’s updates. Nikki will grill Victoria about Adam’s blackmail plot, but she’ll struggle to make sense of the murder mayhem.

Later, Nikki will ask Victor why he’s caving into Adam’s demands. “What aren’t you telling me?” Nikki wants to know in The Young and the Restless weekly preview video.

Will Victor set Adam up for a huge fall? It sounds like Adam may be in over his head, so don’t miss what Victor’s cooking up. Be sure to check back here at CDL for other terrific Young and the Restless spoilers, news and updates.