The Young and the Restless Spoilers: Week of March 23 Preview – Adam & Alyssa Solve 2 Two Murders – Victor’s War Over The Truth 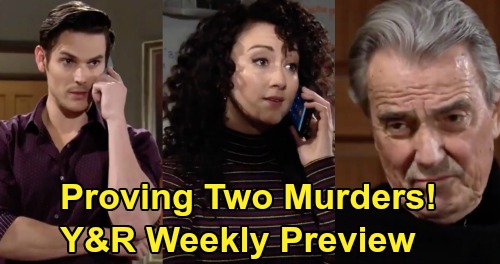 The Young and the Restless (Y&R) spoilers preview for the week of March 23-27 tease that a murder mystery will unravel. Adam Newman (Mark Grossman) will present a theory to his old childhood pal, Alyssa Montalvo (Maria DiDomenico), but she won’t respond well initially.

This theory will start with the idea that Alyssa’s father, AJ Montalvo, might’ve been behind the wreck that killed Adam’s stepfather, Cliff Wilson. Since the drunk driver who hit Cliff was connected to AJ, Adam will think it seems logical – especially since Cliff was having financial issues until he suddenly wasn’t. Keep in mind that AJ was a loan shark!

The Young and the Restless spoilers say Alyssa will freak over Adam’s theory and promptly chew him out. Alyssa won’t think Adam has any evidence to back up his murderous claims – and he doesn’t…yet. That’s why it’s important to join forces with a crime reporter like Alyssa, particularly one who has a strong motive to get to the bottom of things.

Adam will speculate that Victor discovered AJ was responsible for Cliff’s wreck and took a deadly step himself. With a little help from Chelsea Lawson (Melissa Claire Egan), Adam will finally get Alyssa on board. Victor’s potential guilt will be enough to keep Alyssa interested and invested in uncovering the real story.

Y&R’s weekly promo shows Adam saying, “If our fathers are guilty of murder, we have to keep investigating. The truth has gotta be out there.” Unfortunately, The Young and the Restless spoilers point to Adam’s plan backfiring spectacularly. Adam’s setting himself up for real trouble here – and Nick Newman (Joshua Morrow) will see it coming from a mile away!

When Nick expresses suspicions about Adam, Chelsea will pretend Adam just wants peace. She won’t see why it’s so hard for Nick to trust that, but Nick clearly knows his brother all too well. There’s always some plot cooking up. This could kick off a major Newman family battle, which Adam will admit in the week ahead.

“If I’m wrong about Victor’s guilt, it is going to start a war,” Adam says in Y&R’s weekly preview video. Of course, Adam could start a war even if he’s right! This seems like a lose-lose situation that probably should’ve been left buried, but Adam just won’t be able to help himself.

By involving Alyssa, this will be out of Adam’s hands anyway. There’s no way Alyssa will let it go, even if Adam changes his mind. The Young and the Restless spoilers say Adam’s decision to dig will result in extreme, unanticipated consequences. Adam will have to rely on Chelsea’s support as he copes with the massive mess he’s about to make.

It sounds like some exciting scenes are coming up, so we’ll give you updates as other news becomes available. Don’t miss all Adam and Victor’s conflict! CDL’s the place to be for hot Young and the Restless spoilers, news and updates.