BY Heather Hughes on March 19, 2020 | Comments: one comment
Related : Soap Opera, Spoiler, Television, The Young and the Restless 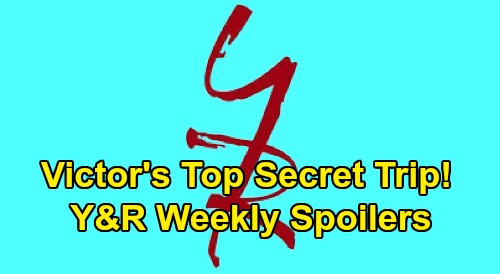 The Young and the Restless (Y&R) spoilers for the week of March 23-27 tease that things will get complicated for several Genoa City residents. First, Nick Newman (Joshua Morrow) and Phyllis Summers (Michelle Stafford) will do a familiar dance. They’ll tiptoe around how they really feel and mask it with their usual banter.

The truth is Phyllis and Nick are feeling the heat, but it’s more than just steamy fun. There’s a deeper reconnection going on, but the past will hold them back. Nick and Phyllis know they tend to hurt each other with every reunion. They’ll be hesitant to take this beyond sizzling hookups, but Phyllis and Nick don’t do casual very well. It’s doubtful they’ll be able to keep their walls up for long.

Meanwhile, Devon Hamilton (Bryton James) and Amanda Sinclair (Mishael Morgan) will discuss something they have in common. Amanda and Devon may have a deep conversation about their foster care experiences. Since Y&R seems to be laying the groundwork for Amanda to be Hilary Hamilton’s (Mishael Morgan) long-lost twin, Devon could give Amanda a nudge in the right direction.

Nate Hastings (Sean Dominic) already talked to Amanda about her biological family, so it’ll be fresh in her mind. Between Nate and Devon, Amanda may surrender to this idea of looking into her roots. Some surprises should be waiting for Amanda soon enough!

Next, Mariah Copeland (Camryn Grimes) will face a harsh reality. Once Mariah finally accepts that things are over with Tessa Porter (Cait Fairbanks), she’ll brace for life without her. Of course, that’ll be easier said than done. Tessa has pretty much been Mariah’s whole world since they met, so Mariah will be feeling lost and alone in the week ahead.

There’s a good chance Mariah will decide to take that Chicago job offer at Sharon Newman’s (Sharon Case) urging. Mariah might believe it’ll help her escape the memories and thoughts of what might’ve been. However, Tessa should be wrapping up her tour soon. You can bet Tessa will also be struggling to let go and reflecting on all the desperate pleas Mariah made.

In the end, Tessa won’t really know what her life’s supposed to look like without Mariah in it. Just before Mariah seeks her fresh start out of town, Tessa will likely return and admit she’s willing to try again in GC. Mariah wants to stick around to support Sharon anyway, so she should have double the reasons to stay. No matter how this plays out, a “Teriah” reunion is definitely in the works.

Other Young and the Restless spoilers say Nick and Billy Abbott (Jason Thompson) will have a fierce faceoff. It appears Billy’s new position at Chancellor Media will lead to some conflict. As for Adam Newman (Mark Grossman), he’ll show Victor Newman (Eric Braeden) his true colors and spark a battle of his own. Victor certainly won’t be happy about Adam digging into this Kansas drama.

The Young and the Restless spoilers say Victor will plan a top-secret trip – perhaps back to Kansas with the intention of tying up loose ends. Unfortunately, a different Newman family crisis is brewing. Victoria Newman’s (Amelia Heinle) recovery will take a step backward, so it sounds like her trauma will become an even bigger problem.

As other news comes in, we’ll have more updates to deliver. It sounds like some exciting Y&R episodes are on the way. Be sure to pop in CDL regularly for great Young and the Restless spoilers, updates and news.