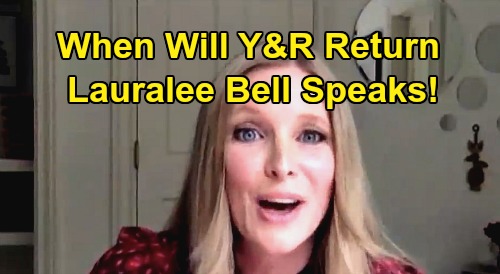 The Young and the Restless (Y&R) spoilers reveal that two CBS soap stars recently offered updates on the COVID-19 aka coronavirus shutdown and when they might be able to get back in the studio. Y&R’s cast and crew haven’t been filming since production was suspended last month, which means new episodes have quickly run out. Y&R has now switched to classic shows until they can make more.

In a video message to go along with the episode that aired Friday, April 24, Lauralee Bell (Christine Williams) and Michelle Stafford (Phyllis Summers) talked to fans about the special encore. Bell and Stafford also took a moment to address what everyone wants to know: When will The Young and the Restless get back up and running again?

Unfortunately, Bell couldn’t provide an idea of when Y&R would resume production. She admitted the cast is in the dark as well – and as Eric Braeden said, many of them are quite eager to return to work!

Bell acknowledged that things are still up in the air and gave a shoutout to loyal fans. The Young and the Restless watchers love their soap, so Bell’s hopeful that everyone will hang in there and stand by them.

“So a lot of you have been asking when are we going to go back to work, when are there going to be new episodes,” Bell said in the video. “And you know, we wish we knew.

We love making The Young and the Restless. And a huge reason obviously why we love it is to have it shown TO YOU. You are the best fans we have. You’ve stuck by us through everything. This is just one more thing that we’re all doing together.”

Bell went on to say that although the classic episodes have been fun, they “really can’t wait to put out new product for you as soon as possible.” The Young and the Restless insisted that if fans will stay with them, they’ll stay with fans, too. “We can’t wait to start entertaining you guys again!” Stafford added.

It’s a good idea to keep a positive attitude like Bell and Stafford since nothing’s known just yet. Y&R will be back with new episodes eventually, so we’ll all just enjoy these classic episodes and try to be patient! As other news comes in, we’ll keep you posted on any new details.