The Young and the Restless Spoilers: Which Adam Newman’s Best With Chelsea – Michael Muhney, Justin Hartley or Mark Grossman?

BY Heather Hughes on May 24, 2020 | Comments: Leave Comments
Related : Soap Opera, Spoiler, Television, The Young and the Restless 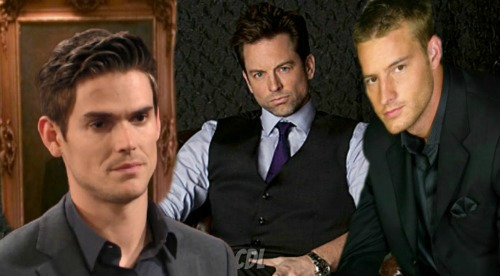 The Young and the Restless (Y&R) spoilers tease that Chelsea Lawson (Melissa Claire Egan) and Adam Newman (Mark Grossman) are a couple that many fans can root for. Their enduring love story has made plenty of Y&R viewers invested in this duo and their future. Of course, it’s always fun to look back at the past as well, which gives us an opportunity to look at three versions of “Chadam.”

Which version of Chelsea and Adam’s romance is your favorite? Some fans like to throw it back to Chelsea and Michael Muhney’s Adam. They had an easy chemistry that can’t be topped in some Young and the Restless watchers’ eyes. Muhney’s Adam brought a special something to the role that his fans still miss to this day.

However, other Y&R fans preferred Justin Hartley’s Adam with Chelsea. Egan and Hartley had fantastic onscreen chem that really made this version of “Chadam” sizzle.

Since Hartley first came on the scene posing as Gabriel Bingham, it added an interesting layer to this phase of the couple’s love story. Viewers will never forget those memorable scenes when Adam confessed who he really was to Chelsea.

Hartley is still missed on The Young and the Restless as well, but he’s moved on to other film and television projects – like his role as Kevin Pearson on This Is Us. Thankfully, Y&R found a great replacement. Mark Grossman has made the role his own and brings another type of “Chadam” chemistry to the table.

Some fans like the current version of Chelsea and Adam’s relationship the best. These two have certainly had some intense moments, including when they first reunited. Later, Chelsea struggled to trust that she wouldn’t lose Adam again. She couldn’t bear the thought of that, so Adam had to reassure Chelsea that she could put her faith in this new chapter.

Chelsea, Adam and Connor Newman (Judah Mackey) have also had some adorable family moments – like after they rescued Oliver the cat back at Christmas. Let’s hope the “Chadam” fam can stick together no matter what drama heads their way.

There’s bound be a lot of it since Adam’s actually to blame for AJ Montalvo’s death, but Chelsea can help him work through that trauma in time.

This could be a chance for Adam and Chelsea to grow even closer. Regardless of which version of “Chadam” you prefer, this lasting love story has been a gripping one! We’ll deliver updates as other Y&R news rolls in.