The Young and the Restless Spoilers: Who Is Y&R’s Worst Father – Victor, Billy or Adam? 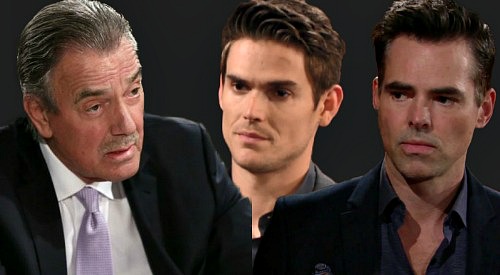 The Young and the Restless spoilers consider a Father’s Day point. Besides Victor Newman (Eric Braeden), who could easily be branded with this unwanted designation, which man in Genoa City, Wisconsin, is the most questionable father?

There are various choices that could be considered. Three will be selected, with any others tagged as runners-up, or as characters who passionate fans can offer comments about.

Young And The Restless Spoilers – Adam Newman Is A Leading Candidate

Adam Newman (Mark Grossman) loves his two sons, but also continues to act so recklessly that it’s fair to question his maturity as a father. Connor Newman’s (Judah Mackey) mental stability was decimated by last year’s wild battle with Victor.

Adam’s willful choice to tamper with his father’s medicine nearly cost the Moustache his life. That lead to Victor’s payback death hoax, which caused Adam to abandon Connor and return to Las Vegas, Nevada.

Viewers also can’t forget that Adam purposely told Christian Newman (Alex Wilson) that he was his father. That scared the poor boy, who believes that Nick Newman (Joshua Morrow) is his dad, with Adam somehow not realizing that result would happen.

Billy Abbott (Jason Thompson) lost a child years ago. Delia Abbott’s (as then played by Sophie Pollono) death was naturally devastating. Adam’s return last year triggered those painful memories and caused Billy’s mind to break. But the information in this paragraph isn’t a knock against Billy.

Thompson’s character was literally saved by Vickie Newman (Amelia Heinle), who came to his rescue at the Chancellor boat house. Even though he was able to apparently eliminate, or at least contain the alternative personality he’d developed, Billy then made a selfish choice.

Billy talked himself into thinking that Vickie didn’t support his authentic self, which translated to him ending Villy. That meant he forced Vickie to take full responsibility for Johnny Abbott’s (Ryan and Holden Hare) and Katie Abbott’s (Sienna Mercuri) day to day lives. That was totally irresponsible.

Young And The Restless Spoilers – Jack Abbott Has Debatable Issues

Jack Abbott (Peter Bergman) has had an up and down relationship with his second born son, Kyle Abbott (Michael Mealor). Years ago Kyle felt so estranged that he took council from Victor. In more recent times, Jack put the character Mealor now plays into competition with Theo Vanderway (Tyler Johnson) at Jabot, knowing that the cousins despised each other.

Keemo and Jack parted on good terms following Luan’s death due to cancer, as Moon’s character returned to Vietnam. But Jack has made scant mention of his oldest son ever since. Shouldn’t he have stayed in closer touch, as Keemo’s only surviving parent? Unless Jack has done so, or has at least made the attempt, the answer is yes.

After all is said and done we ask this question: Between Victor, Adam and Billy who do you think is Y&R’s worst father? CDL is a leading source for everything linked to The Young and the Restless. Check back regularly for Y&R spoilers and news!