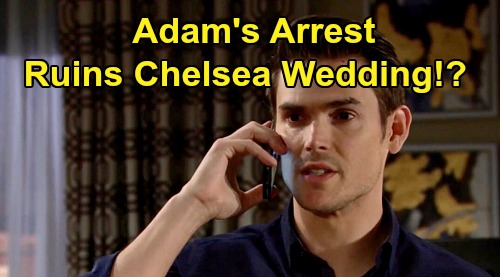 The Young and the Restless (Y&R) spoilers tease that Chelsea Lawson (Melissa Claire Egan) and Adam Newman (Mark Grossman) will take steps toward their future together. In the episode airing February 20, Adam proposes to Chelsea. She naturally accepts, so these two will be headed to the altar before you know it.

Of course, Connor Newman (Judah Mackey) is sure to be thrilled over this exciting news. He was rooting for his parents to get back together, and they finally surrendered to their deep feelings.

Connor clearly knew best! He’s already ecstatic to be a united family, so the idea of Mom and Dad making it official will really leave him on cloud nine.

Chelsea will eventually be Mrs. Newman once again – at least if all goes well! That’s a big if since trouble tends to follow Adam. In this case, it could follow him all the way from Vegas. Will that mystery woman show up and make a mess? It’s easy to imagine a shocking wedding interruption thanks to that problematic widow.

What about Phyllis Summers’ (Michelle Stafford) incriminating recording? That could also fall into the wrong hands or be passed along to the cops by Phyllis herself.

If Adam can’t play by Phyllis’ rules or thinks he can outsmart her somehow, he could land in even hotter water. Adam always seems to think he can handle Phyllis, but she’s proven she’s a force to be reckoned with.

Regardless, Adam will probably remain confident that everything’s under control. He’ll want to believe his future with Chelsea’s secure. The Young and the Restless spoilers say Chelsea and Adam will hopefully get do some fun wedding planning.

Chloe Mitchell (Elizabeth Hendrickson) is bound to put up a fight on this, but she’ll ultimately have to settle down and accept that it’s what her bestie wants.

Chelsea and Adam should be over the moon as they prepare to tie the knot, but Adam’s threat of prison will linger. Will Adam’s past come back to haunt him as his big day arrives? Could Adam even be arrested at his own wedding? That’d certainly be a good twist for drama’s sake!

The Young and the Restless spoilers, updates and news point to some great “Chadam” drama in the weeks ahead. Y&R viewers will be eager to see what’s in store. Chelsea and Adam have already been through so much just to be together, but there’s much more to come!

Do you think Adam and Chelsea’s wedding will actually happen? Will Adam be arrested before he can tie the knot? We’ll keep you posted as other Y&R updates come in. Don’t miss all our hot Young and the Restless spoilers here at CDL.