The Young and the Restless Spoilers: Will Travis Crawford Return For Victoria Hot Romance – Refreshing ‘Tricky’ Better Than Boring ‘Villy’? 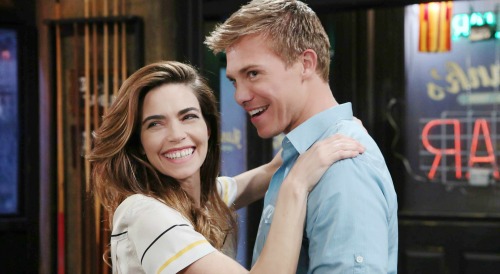 The Young and the Restless (Y&R) spoilers reveal that maybe the CBS soap should rethink the constant rehashes of longtime couples. Some characters are meant to be together, but others should really just move on. Victoria Newman (Amelia Heinle) and Billy Abbott (Jason Thompson) certainly seem to belong in the latter category.

“Villy” goes through failed reboot after failed reboot and it only means pain for Victoria. Of course, pretty much every love interest Victoria’s ever had has hurt her. Even so, there’s one former flame that might be worth giving another chance.

Should Y&R bring back Travis Crawford (Michael Roark) for Victoria? Travis and Victoria had a refreshing spark – one that caught many fans by surprise.

“Tricky” gained a lot of support on social media before The Young and the Restless tanked them hard. However, we want to focus on the good. Victoria was vibrant and alive with Travis.

She met Travis when she was going through a rough time in her life, so he became her escape. Travis was the owner of Hank’s Bar, where he shared some dances with “Tori” and helped her feel safe again.

Victoria and Travis both kept secrets from each other, but their chemistry was undeniable. Plenty of fans want that “Tricky” chem back! Roark’s boyish charm brought a refreshing change of pace. Not only was Roark a good-looking and talented actor, he was versatile.

Travis could’ve served as a love interest for other leading ladies if he’d stuck around.

It’s always a good idea to have a few characters who aren’t related to any of the major players. The Newmans, Abbotts and Chancellors are important, but it never hurts to have a little fresh blood! It was a shame when we had to say goodbye to Travis back in 2016, but Roark offered hope for the future when he left.

As part of Roark’s goodbye message to fans, he insisted that “ya never know if Travis may return to GC one day, maybe a wiser man.” Things fell apart for Victoria and Travis after he cheated with his former boss’ wife, which led to Victoria dumping him. We’d say Travis learned his lesson, so maybe he’s still off pining for Victoria on his boat somewhere!

The “Tricky” pairing might be one worth that’s worth giving another try. There aren’t many good options for Victoria on canvas, and Travis is a guy that worked well for her once upon a time. Would you like to see Travis and Victoria’s hot romance revisited? Would that be better than another dull “Villy” reunion?