The Young and the Restless Spoilers: Will Victoria Rowell Return To Y&R As Drucilla Winters – Lily Needs Mother Back 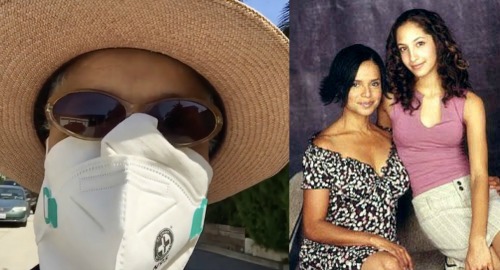 The Young and the Restless spoilers document that Lily Winters’ (Christel Khalil) personal circumstances have dramatically changed since her marriage to Cane Ashby (Daniel Goddard) ended and their twins went away to college.

Recently returning to Genoa City, Wisconsin, at Jill Abbott’s (Jess Walton) request, Lily finds herself working at Chancellor Industries with the one and only Billy Abbott (Jason Thompson), who is quite the character himself. Is Lily revisiting yesterday, both by returning to her home and in choosing to work with Billy, who was once a romantic connection?

Hardcore Y&R fans know that the choice to end her marriage and the passing of her father, Neil Winters (Kristoff St. John), was combined with a period where she spent time in jail for causing the accidental death of Hevon’s unborn child and, days later, Hilary Hamilton (Mishael Morgan).

Lily’s mother, Drucilla Winters (Victoria Rowell), died many years ago. But her passing has never been confirmed.

Rowell was and remains one of Y&R’s greatest actors. Drucilla also stands as one of the show’s most important and memorable characters.

Nathan Hastings (as originally played by Nathan Purdee) was written into the show in the mid-1980’s. He worked as one of Paul Williams’ (Doug Davidson) private detectives. Nathan met Drucilla Barber, her maiden name, whose sister, Doctor Olivia Barber (Tonya Lee Williams), was his girlfriend. Nathan taught Dru how to read, as she was illiterate.

Dru’s aunt was Mamie Johnson (Veronica Redd), who was the Abbott family’s housekeeper. Mamie routinely clashed with Jill, who was married to John Abbott (Jerry Douglas).

Neil was written into the script in 1991. Olivia originally asked him to charm Dru, in an attempt to get her away from Nathan, which is how the epic Dru and Neil love story began.

Dru later gave birth to Lily, who she thought was Neil’s daughter, but actually turned out to be his bother’s, Malcolm Winters (Shemar Moore), child.

Young And The Restless Spoilers – The Assumed End

As fans recall Dru and Sharon Newman (Sharon Case) fell backwards off a cliff in 2007, while in a remote location during a photo shoot. Both ladies were struggling with Phyllis Summers (Michelle Stafford), which led to the dual fall.

Sharon’s survival was coupled with Dru’s apparent loss. Rowell was written out of the show, with Dru’s body never located.

Rowell was invited to return to Y&R’s set in 2019, so that she could participate in shows that honored St. John’s legacy. The return of Lily Winters was momentous, with Rowell’s presence in the group interviews both fully relevant and exceedingly beautiful.

The past is understood. But the future always offers possibility.

Lily has commented about missing her parents. While her father watches over her from Heaven, the potential exists for Dru to be part of Lily’s life here on earth again. Y&R should make what would be an epic, sustained reunion happen.