The Young and the Restless Spoilers: Y&R Suspends Production Over Coronavirus COVID-19 Fears – What Fans Need to Know About Shutdown

BY Heather Hughes on March 17, 2020 | Comments: one comment
Related : Soap Opera, Spoiler, Television, The Young and the Restless 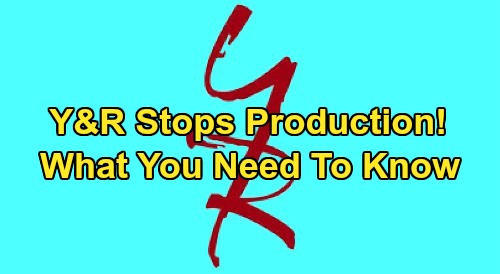 The Young and the Restless (Y&R) spoilers reveal that the CBS soap joins the growing list of productions suspended over COVID-19 aka coronavirus fears. To help stop the spread of the pandemic, Y&R’s following the appropriate guidelines and halting filming. Deadline is reporting that the shutdown officially begins on Tuesday, March 17, so here’s what fans need to know.

The studio’s already dark on Mondays, but they’ll stay dark for two weeks to be on the safe side. Of course, this news is for the best since it’ll help keep the cast and crew safe. Everyone’s trying to do their part and control the crisis, so this announcement was to be expected.

General Hospital was the first soap to suspend production, but The Young and the Restless has now officially joined the list. The Bold and the Beautiful has also announced that it won’t be filming for two weeks, so that’s one more show that’s helping to slow the spread of COVID-19. Safety’s the most important thing right now.

Of course, it’s possible Y&R and the others won’t resume filming that quickly. They expect to take two weeks off at this point, but that could change as they monitor the situation. This production suspension could ultimately be extended, so that’s something to keep an eye on.

A two-week break won’t affect what airs since they’ve got enough episodes already filmed that it won’t matter. If they go beyond that two weeks, it’ll all depend on just how far beyond they go. The Young and the Restless could have to air reruns if the shutdown moves beyond what they’ve got in the can.

For now, we’ll just accept this two-week prediction and hope it all works out! Again, the safety of the cast and crew is the priority. Although the studio may be dark, The Young and the Restless spoilers say the drama will continue on the air. There are still plenty of great shockers and shakeups to look forward to in the coming episodes.

Y&R viewers can expect some Abbott family conflict thanks to Kyle Abbott’s (Michael Mealor) exploding feud with Theo Vanderway (Tyler Johnson). Colin Atkinson’s (Tristan Rogers) arrest is also just around the corner, so plenty of people will be happy to see him go down for his money-laundering plot.

We’ll give you updates as the drama continues. As always, don’t forget to stop by CDL often for the latest Young and the Restless spoilers, updates and news.