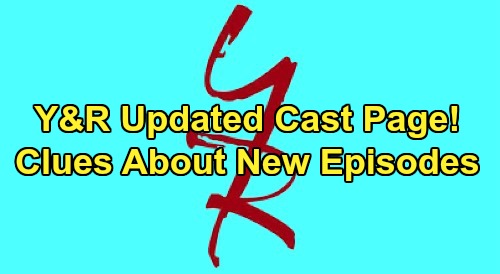 The Young and the Restless spoilers document that the show’s online cast page might hint at which characters will be seen when the first new episodes air. It’s also understood that Y&R hasn’t resumed production yet and is expected to do so on July 13.

Eric Braeden (Victor Newman), Doug Davidson (Paul Williams), Sean Dominic (Nate Hastings), and Cait Fairbanks (Tessa Porter) are some of the cast members whose photos were updated this week. Viewers will likely know by next month if those characters and others will be the first to be seen when Y&R’s new episodes begin airing.

Young And The Restless Spoilers – Logical Daytime Deductions Made

Braeden and Davidson are part of a group that is in a more vulnerable position due to age factors. So, their updated photos, along with Jess Walton’s (Jill Abbott), don’t seem to fit with those actors who would be called back first.

However, using the type of logical deductions that Paul would make, as Genoa City, Wisconsin’s, Chief of Police, it’s still feasible to believe that these specific actors could return.

Y&R is known to be monitoring its sister show’s (The Bold and the Beautiful) testing and safety protocols. Since all appears to be going well with filming at B&B during the last few weeks, TPTB may feel confident in having any cast member return to Y&R during its first scheduled week of filming.

Among the group referenced, Hendrickson and Rikaart are most likely to be seen when the first new episodes air. As viewers recall, Chloe’s due date was about to arrive when the she and Kevin were last seen.

Johnson was said to no longer be on a regular contract. But it’s possible that his final scenes will play out when Y&R returns.

Young And The Restless Spoilers – Questions Must Be Raised

However, the speculative theory about updated cast photos being connected to which actors will be working first raises other points.

While Vilasuso’s photo is updated, Sharon Case’s (Sharon Newman) is not. The cancer storyline led to Sharon having surgery in late April. So, why wouldn’t that issue be addressed first?

Circling back to Braeden, his character was involved in a heated confrontation with Adam Newman (Mark Grossman) during the final new episodes. But Grossman’s cast photo isn’t updated?

Production is scheduled to resume. So, many of the questions about what happens next in GC will soon have answers.