The Young and the Restless Spoilers: Zach Tinker Pops a Hairy Question To Cait Fairbanks – Fen and Tessa At Home

BY Sean O'Brien on May 25, 2020 | Comments: Leave Comments
Related : Soap Opera, Spoiler, Television, The Young and the Restless 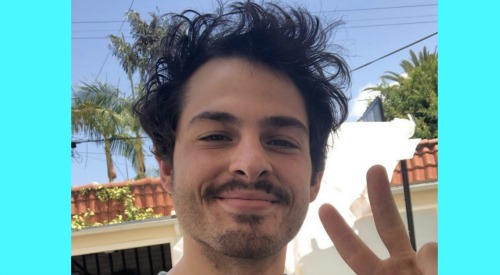 The Young and the Restless spoilers document that Zach Tinker (Fen Baldwin) and Cait Fairbanks (Tessa Porter) are a real life couple, as devoted Y&R fans know. Considering their romantic status, it’s fair to wonder if this couple will be getting married?

Tinker has posted a video of him popping a question to Fairbanks. He said, “Hey babe, babe. So, I’m thinking of rocking a new style. What do you think?”

A corresponding photo, along with the video, showed a poofed out hairdo and facial hair.

Camryn Grimes (Mariah Copeland) used no words in her reply to Tinker’s humorous effort. Instead she simply posted a laughing with crying eyes emoji face.

Tinker’s first break in the business came in 2015, when he was in the short film Party Killer. He went on to appear in a number of one-shot television shows, before landing a multiple episode part, as Craig Cignarelli, on Law & Order True Crime in 2017. Along with other credits, Tinker played Sam in 2019’s American Horror Story.

The twenty-six-year-old actor became the latest recast of Michael Baldwin (Christian Le Blanc) and Lauren Fenmore Baldwin’s (Tracey Bregman) son in 2018. He was nominated for a Daytime Emmy Award in the Outstanding Younger Actor in a Drama Series category in 2019.

This actor is clearly in demand, as his IMDB page lists five projects that were completed in 2020. He has another five that are in post-production.

Like her significant other, Fairbanks sports an impressive career resume as well. The actor, who’s also 26, gained her first credit in 2006, when she played Gabby Walsh in the documentary, Untold Stories of the ER. She had a voice role in Hannah Montana and appeared as Mindy Sanchez in CSI: NY in 2007.

The actor appeared in a number of television shows and movies until landing her first recurring part in 2016. She played Ursula Witt in the TV show, KC Undercover.

Fairbanks was cast as Tessa on Y&R in 2017. She was nominated for Daytime Emmy Awards in 2018 (Outstanding Younger Actress in a Drama Series) and 2019 (Outstanding Original Song).

Fairbanks has a regular part on Y&R. Her character recently reestablished a connection with Mariah after unexpectedly touring the world with an ex-boyfriend who has a solid singing career.

Tinker’s character was seen earlier this year, but Fen is a recurring role. Fen has his addiction issues in check and is currently pursuing a singing career after leaving law school.

On this weeks episode of “Will Cait Hate My Facial Hair