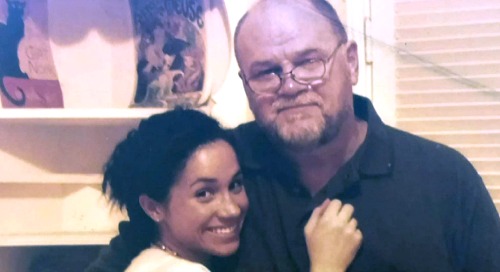 Thomas Markle has something to say about some of the new information that’s coming out in a book about his daughter Meghan Markle and Prince Harry. As royal watchers know, there’s a biography about to hit the shelves called “Finding Freedom,” and as excerpts are being published early, we’re getting a better idea of the relations between Harry, Meghan, and the rest of the royal family as Harry and Meghan exited royal life.

The biography, which is written by Omid Scobie and Carolyn Durand, will be formally released on August 11, and the authors claim to have spoken to over 100 sources, including “close friends of Harry and Meghan’s, royal aides and palace staff (past and present).”

But plenty of snippets from the book have been released, and it’s becoming increasingly clear that the book is very Harry and Meghan friendly.

The authors deny that Prince Harry and Meghan Markle contributed to the book in any way, but there’s plenty of speculation that they may have indeed contributed, especially since the book seems to paint them as victims and takes a very one-sided view of their relations with other members of the royal family.

For example, according “Finding Freedom,” Prince Harry believed that there were people within Buckingham Palace who disliked Meghan and sought to make her life utterly difficult, and the book paints a rather unflattering picture of Prince William and Kate Middleton, saying that they didn’t sufficiently welcome Meghan into the fold – something that sources say William and Kate vehemently deny.

Well, now Meghan Markle’s father, Thomas Markle, has something to say about all of this. The Sun is reporting that Thomas has said that it is the “worst time in the world to be whining” given that people across the globe are facing serious hardships due to the coronavirus crisis.

Furthermore, Thomas said that “I love my daughter. But I really don’t appreciate what she’s become right now.”

You might remember that Meghan is currently estranged from her father, and that she’s suing Associated Newspapers over the publication of excerpts of a letter she wrote to her dad after her wedding to Prince Harry in 2018.

Needless to say, things between father and daughter aren’t positive right now, and we doubt that Thomas’ public comments about “Finding Freedom” aren’t going to help any.

At any rate, there will surely be more explosive revelations about Prince Harry and Meghan Markle from “Finding Freedom” in the coming days. We’ll be sure to keep you posted on the latest. Be sure to check back with us for more British royals news and updates. Here at CDL, we’ve got you covered!