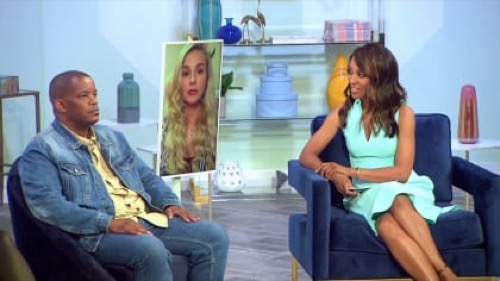 So make sure to tune in tonight between 8 PM – 9 PM ET for our 90 Day Fiance recap.  While you wait for our recap make sure to check out all our television spoilers, news, recaps, and more, here!

Tom took a break. He took a break because Avery came on wanting to say something and Tom wanted nothing to do with her. It turns out there was an issue between them. Avery later explained that Tom slipped into her DMs and that he asked her out after her breakup with Ash. Avery had turned him down. Not long after she did so, she got a message from Ash in which he claims Tom screenshot his conversation with Avery and sent it to Ash. Ash told Avery. Avery assumed the worst about Tom and all along it had been a lie. Ash never received screenshots. He said Tom had contacted him to make sure the relationship was over and that he had felt hurt. And so he tried to sabotage the relationship because he had been jealous.

Ash had lied about Tom. Only Avery still doesn’t trust Tom and she and Darcey were on the same team with him. They thought Tom was untrustworthy and Avery wasn’t the only person he hit on this season. He also hit on Stephanie. Stephanie hadn’t known she was being hit on at the time and so she ignored the message. She still wants to ignore it even as Tom confessed he was making a move. Tom was very much single. His last relationship didn’t work out because the two of them drifted apart and he began seeing someone else. That someone else didn’t work out. He had a fling with her and then it was done. And now Tom is implying there might be a future between him and his ex Darcey, but she refuses to look back and she said the relationship was over.

There were other couples. Like Lisa and Usman. The two of them were married on this latest season and they had plenty of fights before they made it to the altar. Lisa and Usman almost broke up several times. Some of their fights were culture clashes and some of their fights were merely attitude problems. The couple was married and still, they sometimes block each other on social media. Their fights were legendary. They even got into an argument as they were discussing their previous arguments and so Usman opened the discussion to the others. He asked the group if all American women like Lisa. Both Ed and Avery said no. They said Lisa treated him disrespectfully and Ed said he deserved better.

Lisa became so upset that she started yelling at everyone who wanted a say. She told Avery this is why Ash dumped her and she threw the Rose incident back into Ed’s face. Lisa said that any American woman wouldn’t want her man to talk to another woman while they were together. She said that Usman’s “fan” had made a move on him and Usman hadn’t turned this woman down because he liked the attention. He liked that a porn star contacted him. He didn’t see why Lisa was so upset. Usman said he’s a musician and that he was reposting what this other woman said because she has a huge fanbase. Usman explained that he schmoozing. He has to do it for his career and so what wasn’t about his career was the extra wives.

Usman’s culture made it permissible to take at least four wives. He was married to Lisa and so Shaun asked him if he’d consider marrying other women now. Usman said yes he would add more wives. He said that Lisa was too old to have a child and so he would marry again in order to become a father. His wife Lisa knows about his plans. Lisa said a second wife would have to provide for the first wife and so she didn’t think another wife would be readily available anytime soon. Lisa also added that she would take on more husbands if he took on more wives. Lisa didn’t want him to get married again. Only she wouldn’t be able to stop him from doing so. She comforts herself in knowing this second marriage wasn’t legal in the US.

Lisa said this other wife would never really be a wife. She would just be someone to give Usman children and so Usman disagreed with her. He said there would be a second wife. This other marriage would count to him and he would treat this other woman as his wife. Usman also said he doesn’t plan on moving to the US. He and Lisa were talking about that right now. She wants to come to the States and he doesn’t. He’s a star in Nigeria. Its his home and he gets to take the additional wives there. Lisa hadn’t wanted to discuss the move with the rest of the cast. Not that this stopped the cast from talking about her. There were some that thought she was delusional in what she wanted from Usman and then there were some on her side. Darcey and Stephanie both sided with Lisa. They thought she deserved better.

Then there was David and Lana. Lana was given a cell phone so that she could remain in contact with her fiancé David and yet David had problems contacting her tonight. He tried to reach her online. He couldn’t get to her because she wasn’t hooked up to the site and so Lana will be missing this Tell-All. Lana wasn’t there to explain herself, but David sure came up with excuses for her and he even came with an excuse for why she was still on the many websites. These websites were paid websites. The men had to pay to use them and so naturally it was assumed that Lana was being paid as well for getting these men to talk to her online. And as her fiancé, David should have had a problem with it.

Only he doesn’t. David said that these men are Lana’s friends. He said Lana was only talking to them because she’s known them for years and he came up with an excuse for why he couldn’t call Lana on her cell phone. Lana claims it was hard to navigate her iPhone with her long nails. She said it would be better if they stayed talking through the computer and that meant they were still talking online. This was so outlandish that Ed began laughing at David. Ed and everyone else could see that David was being scammed. David has no true commitment to Lana. He goes almost a week without speaking to her because she’s that hard to pin down and still David doesn’t see the problems in his supposed relationship.

Ed eventually apologized for laughing. The others told him to do it and he did. Ed apologized. This in turn calmed down David who was getting agitated. David refused to believe he was being scammed. He believes Lana loves him and the show brought Cesar from the past season because he had been a similar situation. Cesar dated a Ukrainian woman he met online. Cesar had been burned badly and he tried to warn David about it. David had also talked to Cesar’s ex-girlfriend years ago and the relationship hadn’t taken off because Maria had been too high-maintenance. Therefore, David has had some experience with these scammers in the past. These encounters should have made him smarter and they haven’t.