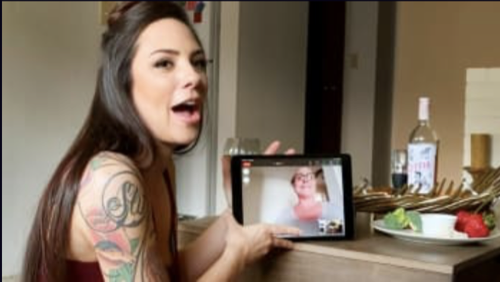 Ed relives an uncomfortable first day in the Philippines. Stephanie talks about emotional baggage. Ash reveals how the show led to a startling discovery.”

So make sure to tune in tonight between 8 PM – 9 PM ET for our 90 Day Fiance: Before the 90 Days B90 Strikes Back! recap.  While you wait for our recap make sure to check out all our television spoilers, news, recaps, and more, here!

Avery is getting to watch the show where she and Ash meet for the first time. Ash is in Australia and he is going to be watching it as well. Ash looked very happy to meet Avery and they kissed, now he says she should have freshened up because she smelled funky.

David is sitting down with his cat to watch the episode when he went to buy a motorhome. His plan was to retire soon and travel full time. We see him on a unicycle. A viewer says he socially distanced himself before it is cool. We see photos of Lana, they have not officially broken up, but they don’t communicate as much as they used to.

A viewer criticizes the site he uses to communicate with Lana, David doesn’t care, it serves a purpose. Over the time that he has known Lana, he has spent one hundred thousand dollars on chat.  He has actually spent $300,000 on the dating sites over the years. He doesn’t care about the money, he’s got it to spend and could still by himself a fleet of motorhomes.

Stephanie sits down for an episode to see when she finally goes to Australia. She says she was so infatuated with Erika when they were long distance. Viewers say Erika has her lips injected, she says yes, she has been doing it for two years now. Stephanie says her ideal night is cooking with her partner, opening champagne, and watching a documentary. Unfortunately, Erika’s idea of a perfect night is spending it with twenty of her closest friends fondling beer.

Ed has a shower with his dog to get ready to watch the show, Rosemarie is all set to go as well. Rose says Ed is not too short, he is just too childish to ride the rose.

Tom is getting ready to watch his episode, so is Darcey. We see the episode when Darcey and her sister were at a spa. Her sister shows her a photo of Tom and his new girlfriend, a Darcey look-a-like. One viewer makes a comment about Darcey’s boobs, she loves the comment. Darcey watches herself tear up, Tom doesn’t like seeing her cry, he tells her to move on.

Her sister tells her to be the best that she is and show Tom what he is missing. Tom looks genuinely hurt when he sees Darcey sad. Although Tom has no issue with making fun of Darcey’s sister.

Avery is told she is high maintenance, she gets really defensive about it. Avery talks about Ash, she says he makes feminine terms towards a woman because he thinks they are going to be more connected to those words, but they sound strange. A viewer makes a comment about Ash’s eyes, so he explains that he has Grave’s disease, and it is much better than it was.

He controls it with medication and food. Avery says she noticed at times, but it only really came to her attention when the show aired. Ash thanks everyone for being caring and bringing it to his attention. Avery told Ash that he was going to stay in separate rooms, but it didn’t last long, they both moved into the same room. He gives her black roses. A viewer says that black roses symbolize death. Avery says it has nothing to do with death, she loves black roses and he was thoughtful.

Back to Ed and Rose, it is the morning of the first night together. They take a ride in the cab and Ed is surprised to see how congested it was. He thought they were going to a mall, they ended up at a hot sweaty flea market. When they are shopping Rose takes his wallet to hurry things up when they are paying, a viewer says he is not an ATM, she says she was just helping and he looks more like a big gas tank.

David is sitting with his cat watching an episode, he is getting ready to leave for Ukraine to meet Lana. He trusted Lana, no matter that viewers say that he is being taken advantage of. He says that Lana loves chat sex, they have it every day. David calls his friend in Ukraine, she tells him that she is worried that he is being scammed.

Erika sits down to watch some more, so does Stephanie. Erika says they talked about her going to New York, but they never talked about being engaged. Stephanie says she spent $900 on all the gifts for Erika. Erika says that she left all the gifts on Stephanie’s bed when they broke up. Stephanie says she loved Erika’s photos that she would send, but the photos of her boobs were a bit much. Erika and the viewers make fun of Stephanie’s tears, she says the camera didn’t zoom in close enough, she was feeling real emotions.