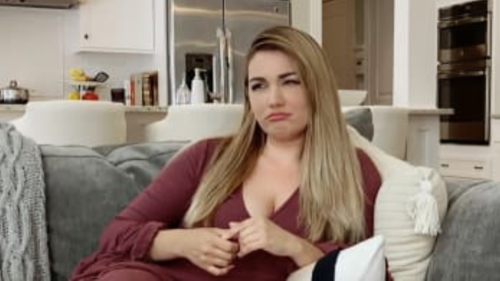 Couples from “90 Day Fiancé: Before the 90 Days” are back! They are all back tonight and they’re spilling all the tea. These couples have experienced so much. There’s been a lot happening and so each couple or former couple was given the chance to break down what was going on behind the scenes in each episode. The couple that went first tonight was the former couple Avery and Ash. Their season B90 was rocky. Again, these two are no longer together and their season more or less explained why. Their relationship started okay. They were happy in the beginning because they each described having great sex together and so the problems didn’t occur until they were getting to know each other.

Avery as it turns out didn’t quite like or respect Ash once she saw him at work. Ash is a life coach. He held a seminar for women where he used the opportunity to flirt with them as much as possible and then he went on to use his seminar to tell these same women that they have specifically gendered roles. He played it down as the feminine brain and the masculine brain. He came across as very misogynistic. He made it out like women were the inferior sex and afterward, there were no women that wanted flirt with him anymore. He couldn’t even get Avery to get sexy with him again. She was just too angry.

Looking back, Avery can laugh about that seminar. She said he was woefully unprepared. She agreed with the audience when they said a feminine brain would at least have done the proper research before giving a seminar and they wouldn’t have pulled an Ash. Ash simply said a bunch of random things. There was no connection, no research, and he said illiterate. Avery is still finding new ways to laugh about her old relationship with Ash. Ash on the other hand didn’t find it as funny. He said he had panicked at the time and that he never meant to say all those things. He also thought it was a little harsh that no one was giving him the benefit of the doubt.

The women, both those in the crowd at the seminar and those watching at home, had truly turned on Ash. They all began hating him after that seminar and so that was the beginning of the end. Ed, who was also on this past season, had understood where Ash was coming from. He didn’t have a great season either and things were still bitter between him and his ex Rose. Rose still got upset when she rewatched the episode where he gave her mouthwash. He gave it to her because he said her breath smells bad and he wanted to fix it. He just didn’t go about it the right way. The ladies of Pillowtalk all came down on him. They sided with Rose and Rose was thankful for all of them.

Rose especially loved the TikTok videos. There were young TikTokers out there who pulled their shirt over their heads to imitate Ed and the fact that he has no neck. Ed tried to laugh with the crowd about that one, but he couldn’t help making digs at Rose. He kept mentioning her breath smelled really bad and he said that along with her sister was a big drawback for him. Ed is usually in better humor than this and so tonight he was being a real jerk. He was being as shady as David turned out to be. David never laughs at himself. He was just too sensitive about his past season on the hit show.

David dated Lana. Or technically he is dating Lana. They’re still together according to him and so there was no telling if that was reliable. David tended to see what he wanted to see. He was with Lana whose from Ukraine and it was clear to everyone that she was just not that into him. Lana made plans to meet with David five times. She never showed at of those meetings and she also gave him a fake address to travel to. Lana later said she didn’t know David all that well when she did that. She said she couldn’t give out her information to a stranger and so pretty much played with David’s emotions all throughout the season.

David rewatched the moment he knocked on a stranger’s door after Lana gave him the wrong address. He was a bit better tonight than he usually was because he laughed when the Pillowtalkers called him a stalker and he confessed that his actions might have been slightly stalkerish. David has never been able to laugh at himself before. He tended to be too much on the sensitive side and he would get offended over every little thing. He was getting better about it because he knew that the show was getting close to the big reveal. The big reveal was when he finally did meet up with Lana and he proved to everyone that she was real. And so David couldn’t wait to read the reactions to that moment.

The only other person who received as much negative feedback as David was Tom. Tom broke up with Darcey by calling her fat and telling her he met someone else. Tom had to listen as everyone mocked him for giving Darcey that letter. He wrote a letter telling her his reasons for why they couldn’t be together and he truly expected Darcey to read it. She didn’t. She instead ripped it up and threw in the trash. Darcey said she wanted nothing to do with Tom and people didn’t really believe her, but they mostly thought Tom was a narcissist. It was all about him and everyone could see it. Tom is still trying to defend his actions.