TLC ’90 Day Fiancé Spoilers’: ‘Before The 90 Days’ – Ash Naeck & Avery Warner No Longer Together – Split Before Filming ‘Tell All’ 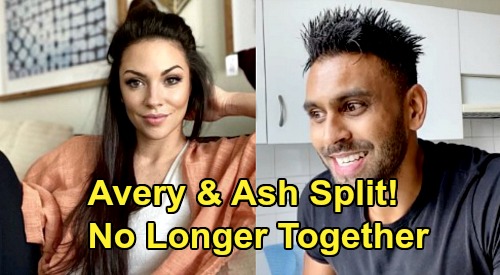 TLC 90 Day Fiance: Before The 90 Days spoilers tease that Ash Naeck and Avery Warner have certainly had their share of ups and downs on the show. The couple has been through Avery’s suspicion that Ash has inappropriate relationships with the women he coaches, a disastrous relationship seminar, and a subsequent argument that almost was a permanent breakup.

But according to recent intel from a reliable source, it seems that Ash and Avery’s relationship sustained and actually outlived the filming of the show. This is according to The Fraudcast, which is a podcast conducted by Frauded By TLC. According to the latest Fraudcast episode, Ash and Avery stayed together through the entire season of the show, although that doesn’t mean that their relationship stayed cordial the entire time.

Rather, the Fraudcast episode made it clear while the couple were together throughout the entire season of Before The 90 Days, they may have been on-again, off-again after the filming concluded. The hosts also reported that Ash made at least one trek to the US to visit with Avery.

Well, this past weekend, various cast members from the show filmed a virtual “Tell All” show. Both Avery and Ash participated in the Tell All, but they were both single at the time of filming, and the Fraudcast hosts reported that Ash and Avery broke up “maybe a week to a couple days before” the Tell All was filmed.

This would mesh with a statement that Ash made on his Instagram account very recently. In response to an Instagram User’s Question as to whether he and Avery were still together, Ash replied simply “no.” That reply of Ash’s has since been removed from the comments, although the question and numerous comments in reply to Ash’s “no” still remain there.

It’s informative to know that Ash and Avery did make it through the filming, which suggests that they were honestly trying to make their relationship work. In the sneak peek for Sunday’s all-new episode that you can catch on TLC.com or the TLC GO app, Ash and Avery are shown visiting with Ash’s ex-wife and young son.

The fact that Avery and Ash were willing to go this far despite their huge blowup the day before over the relationship seminar seems to show that they were truly invested in their relationship. It’s sad that their relationship apparently didn’t make it, but it’s not too surprising given some of the difficulties that Ash and Avery battled.

At any rate, it seems that we’ll get more details about Ash and Avery’s relationship in the Tell All. Are you looking forward to hearing more from Ash and Avery about their relationship? Stay tuned to 90 Day Fiance: Before The 90 Days and don’t forget that CDL is your go-to source for all the latest 90 Day Fiance news, updates, and spoilers!

"It is not the critic who counts. … The credit belongs to the man who is actually in the arena; whose face is marred by the dust and sweat and blood; who strives valiantly … who, at worst, if he fails, at least fails while daring greatly; so that his place shall never be with those cold and timid souls who know neither victory or defeat." – Theodore Roosevelt . . . . #mindset #lovemyhaters #lovemysupporters #risingup #limitless #fearless #humility #compassion #loveyou