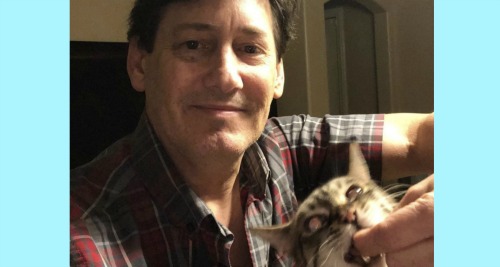 TLC 90 Day Fiance: Before The 90 Days spoilers tease that David Murphey may not ever find his online love known simply as “Lana,” but he’s got some cute companions nevertheless. We’re talking about his adorable feline companions, Mothra and Gamera.

David recently spoke about his cats in an online Q&A session on Instagram. “My cats Mothra and Gamera are now 16 years old,” David said in the Q&A. “They are sisters from the same litter. I felt I needed two of them to take care of each other…One [is] seal point lynx and the other is the normal brown tabby. Neither are show quality. They are F4’s, 4 generations away from the wildcat they come from.”

David is relatively new to Instagram, with just 12 posts on his feed, but three of those posts feature his beloved cats. In fact, David’s very first post was of himself and one of the cats playing with his fingers. Later, David posted a picture of Mothra, captioned: “Ok ok, due to popular demand, MOTHRA.”

David’s next cat post was very recent, shortly after the episode aired where David showed up at the address he had for Lana and knocked on Apartment 8’s door. The photo was of Mothra, who is giving David quite a look. David’s caption reads: “Mothra gives me that look after Lana doesn’t show up again. Seems she is telling me. ‘She didn’t show up did she…..told ya.’”

David’s followers have enjoyed the kitty pictures, and some were especially amused with Mothra’s stance on David’s search for Lana. For example, one viewer replied: “Awe David, I too am pissed and disappointed Lana didn’t show.” And another simply said: “The cat knows.”

Still someone else commented: “We all know that “Lana may be a Catfish…Time to look for something real & in person…your fans are getting restless lol!” It’s great to see people having some humor with the situation, and it’s great to see David joking about it as well.

Well, the previews for the upcoming new episode of 90 Day Fiance: Before The 90 Days shows David leaving the scene of Lana’s apartment building all alone. That doesn’t bode well for what David’s going to find behind the door of Apartment 8.

So, what’s David going to find? Could this just be some random address that Lana (or, ahem, the person calling him or herself Lana) just provided to David at one point? Something tells us that David is going to be stunned by what he finds, which will probably be that no one named Lana lives there.

We’ll see what happens with David and Lana, but for now we’ll enjoy David’s cats. They’re cuties, so be sure to check out David’s Instagram page for more updates on Mothra and Gamera in the future! Stay tuned to 90 Day Fiance: Before The 90 Days and remember to keep CDL bookmarked for all your 90 Day Fiance news, updates, and spoilers!