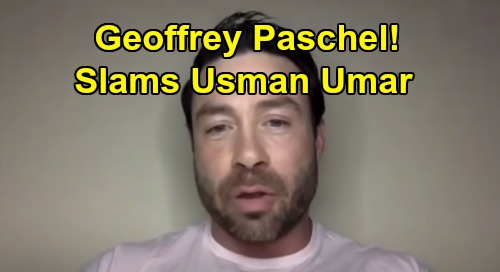 TLC 90 Day Fiance: Before The 90 Days spoilers tease that Geoffrey Paschel might not have been invited to the official Before The 90 Days Tell All special, but he’s certainly speaking out about his opinions on the show. Geoffrey recently went on the Domenick Nati show and was interviewed about a variety of topics, including his romance with his Russian love Varya Malina.

Geoffrey had a lot to say about how everything went down when Varya showed up unexpectedly at his door at his Knoxville, Tennessee home. But Geoffrey also had some sentiments to share about his co-stars Lisa Hamme and Usman Umar as well.

Of course, this comes after Lisa has gotten quite a bit of flak among fans for the way she’s perceived to treat Usman, and in particular of the allegations that she’s used a derogatory term to describe Usman in the past. But according to Geoffrey, Lisa is seriously committed to Usman, and it’s Usman who Geoffrey worries about in the relationship.

Geoffrey said: “As for Usman, I don’t talk to him a lot. I get little snippets…I question him. I want to believe that he’s in it for love, but then you know you just kind of weigh all the options, you really don’t know.”

Geoffrey continued: “I talk to Lisa and I see her heartache and her stuff that she’s going through and what she says about Usman. She called me today. I know she’s in love with this guy, I have no doubt about that.”

What do you think about Geoffrey’s statements regarding Lisa and Usman? If indeed Lisa is more “into” the relationship than Usman is, then that could pose some serious problems down the road.

Of course, given Lisa’s jealousy in the past over other women’s attention toward Usman, then there could be some real fireworks if Usman does decide to take another wife…or two.

Do you think that Usman is in his relationship with Lisa for the right reasons? Stay tuned to 90 Day Fiance: Before The 90 Days and don’t forget that CDL is your go-to source for all the latest 90 Day Fiance news. We’ve got you covered with the latest show recaps and spoilers!