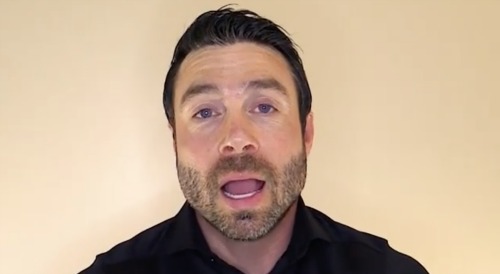 TLC 90 Day Fiance: Before The 90 Days spoilers tease that Geoffry Paschel has some truths to get off his chest. As you probably know by now, the Before The 90 Days Official “Tell All” was filmed a couple of weeks ago, and it got quite a bit of press because 10 hours of raw interview footage was leaked online. Of course, the Tell All is an opportunity for fans to catch up with the show’s stars after the season concludes and find out what everyone is up to.

Well, one person who wasn’t a part of the official Tell All was Geoffrey, who spent most of the season of Before The 90 Days romancing Varya Malina. Geoffrey was apparently not invited to the Tell All, and he has indicated on social media that he and TLC have parted company. But it looks like Geoffrey may have a Tell All of his own coming!

The video then teases that Geoffrey will give answers to various questions, including why he went to jail – Geoffrey says in the video snippet that he was in the drug trade. “I was a drug dealer,” he says.

Next, an interviewer off-camera asks about Geoffrey’s relationship with his ex-wives. “You know, we argued. We didn’t get along a lot,” Geoffrey says in the snippet. The video also promises answers about what happened in Nicaragua, and Geoffrey says, “Of course, I was there when she gave birth. You can’t build a lie upon a lie upon a lie and expect it eventually to become the truth, and that’s what they kept on doing.”

Geoffrey’s followers have been responding steadily to Geoffrey’s Tell All teaser. One person said: “Geoffrey, I am so sorry that you even have to defend yourself or bring up your past. Seeing you cry over bringing up the passing of your son is heart wrenching. I am so sorry, may you find peace, happiness, and the love you deserve.”

Someone else commented: “It will be nice to actually hear the truth for once from one of these cast members.” And someone else said: “U don’t owe anyone any explanation to ur life. Keep being a great man and don’t feel u have to share what u don’t want to.”

If you’re following Geoffrey on Instagram, then you’re probably all set to see the full and final version of his own Tell All. There’s no word at the present time exactly when Geoffrey’s Tell All will drop, but we’ll be sure to keep you up to speed! Stay tuned to 90 Day Fiance: Before The 90 Days and rest assured that CDL will keep you informed about all the latest 90 Day Fiance news, show recaps, and spoilers!