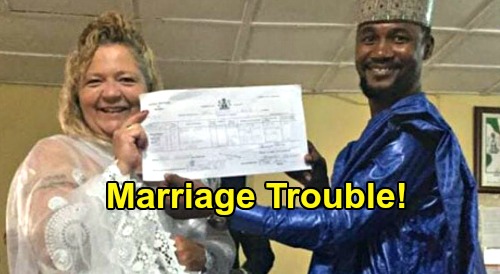 TLC 90 Day Fiance: Before The 90 Days spoilers tease that Lisa Hamme and Usman Umar may have another big problem on their hands. As viewers know, on the last full episode of Before The 90 days, Usman and Lisa had a major blowup, or at least Lisa did. Usman tends to be rather even keeled, and when he tried to school Lisa about the proper roles for a man and a woman in a marriage, Lisa got downright hostile.

Well, in the new sneak peek of next Sunday’s episode that recently dropped on TLC GO, Lisa and Usman made up shortly after Lisa’s big outburst, which is good, but whether the gender role issue is really behind them remains to be seen. To his credit, Usman did go after Lisa to try to work out their differences, and he was willing to do as Lisa suggested and blend their two cultures,

But in the confessional, as Lisa and Usman were sitting together, Usman said he was only willing to compromise to 60/40, with him having 60% and Lisa having 40%. Usman said it could never be 50/50, and Lisa said, “let’s see what happens.” Of course, since this is Lisa that we’re talking about, she’ll probably never be at 40% in practice!

At any rate, this particular problem seems to be behind Usman and Lisa for now. But the next issue for the couple may be of a more practice nature, In the previews for next Sunday’s episode, Lisa and Usman go to see a man about getting married, but the man says quite bluntly that he cannot marry them. What could be the problem here?

Does the man have some problem marrying Usman to an American woman? Or is there some other hang up that Usman and Lisa weren’t counting on. It could be some simple technical issue, still it looks like a pretty serious matter. Lisa says in the preview that “I bent over backwards to make sure that this wedding happens and now it might not happen. I feel like I’m in a nightmare.”

We’ll see what happens here, but it looks like Lisa and Usman have hit a snag. And since time is of the essence, Lisa and Usman need to iron out any problems pronto. Do you think we’ll actually see a wedding for Lisa and Usman? Stick with 90 Day Fiance: Before The 90 Days so you don’t miss any of the latest spoilers and news. We’ll keep you up to date on all the hot new information, so stick with CDL.