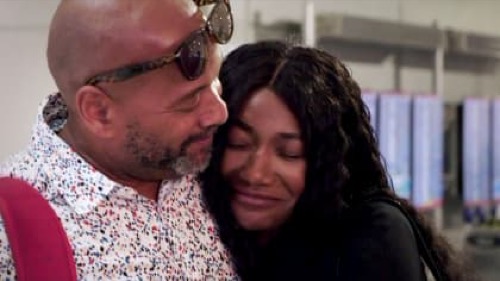 Ari’s family confronts her about Biniyam’s motives. Jenny takes a leap of faith to be with Sumit. Brittany is Jordan-bound with a shocking secret.”

So make sure to tune in tonight between 8 PM – 9 PM ET for our 90 Day Fiance: The Other Way recap.  While you wait for our recap make sure to check out all our television spoilers, news, recaps, and more, here!

Deavan is an American. She moved to South Korea to be with her then-boyfriend Jihoon and he was also the father of her youngest child. Deavan actually has two children. She has a child from a previous relationship and she has a son with Jihoon. Jihoon was supposed to get everything ready for their family when Deavan moved to South Korea with the children, but he didn’t. He failed to get them an apartment. They had to live with his parents. Jihoon also failed to get things settled financial and he was in fact heavily in debt. He told Deavan this after she moved out there. Deavan chose to marry him anyways because she was in love.

Deavan married Jihoon in spite of everything showing her that he wasn’t ready. She would later get tired of his false promises and she would move back to the States. It was just temporary. Deavan planned all along to go back to South Korea and her husband promised her that things had changed for the better. For one, he promised they wouldn’t live with his parents. His parents disapprove of Deavan and his mother has made it known that she wishes he would have married a Korean woman. His mother even said this after the two had been married. Jihoon’s mother said this at last year’s Tell All and the couple has been trying to move past it ever since.

Yazan was different. He didn’t make false promises to his girlfriend Brittany. He also had a job. He works at the fish market with his dad and he was willing to find a place for him and Brittany once they got married. If anything, it was Brittany who was bringing problems to the relationship. Brittany couldn’t marry Yazan right away because she was secretly married and she had forgotten about it until now. Brittany, therefore, needed to get a divorce before she could marry again. She also needed to tell Yazan why the wedding needed to wait and so far she hasn’t told him anything. She hasn’t told him about her marriage or that she doesn’t want to convert.

Brittany doesn’t want to convert to Islam. She changes the subject whenever he wishes to talk about it and, so as far as Yazan’s aware, Brittany is going to convert. He was so sure about this that he was telling friends. His friends were concerned about him marrying an American. They also weren’t sure if Brittany could handle moving to Jordan and converting. They tried to bring it with Yazan. He ignored them because he thinks he has it all figured out and he doesn’t. He’s so in the dark. He doesn’t even know how much in the dark he is and so trouble was brewing right under his nose. And he didn’t know about it.

Ariela’s situation was a bit like Deavan has been. She met her boyfriend Biniyam while she was on vacation and they got pregnant quickly into the relationship. Ariela wants Biniyam to be a part of her child’s life. She wants to be a family with him and so she’s moving to Ethiopia to do so. Ariela planned on having her baby over there. Her family was concerned for her because they thought she was jumping into a relationship too fast and they didn’t think she thought things through. They had asked her about how she was going to raise her baby boy. She was born Jewish and Biniyam is an Ethiopian Orthodox Christian.

Ariela said her faith is important to her. She was going to raise her baby in her own faith and she told Biniyam that he doesn’t get a say. Biniyam has been married before. He married an American and they had a child early in their relationship. Biniyam has a son with his ex-wife. The wife went back to the States and she took their son with them. Biniyam hasn’t seen his son physically since. He’s also not on speaking terms with his ex-wife. He told Ariela about it and Ariela in turn told her family. Her family asked her what if Biniyam was using her to get a Green Card. Like maybe he wanted to come to the States to see his son and he was merely using Ariela to do it. And she doesn’t believe that’s what he’s doing.

Then there’s Kenneth. Kenneth is moving to Mexico to be with his much younger boyfriend Armando and Armando’s young daughter. Kenneth is leaving behind his family. He was going to miss thanksgiving. So, the family decided to hold the event early so that Kenneth could make it. Kenneth got to spend time with his children. He told them about his move and he even explained that Armando was younger than they thought. He was technically the same age as Kenneth’s son’s girlfriend. This upset the son because he didn’t think it was acceptable that his dad was with someone in their early thirties while he was in fifties. And another thing that upset everyone is that Kenneth told them he bought an engagement ring.

Kenneth’s children wanted him to wait before he proposed. They were worried because Kenneth hasn’t lived with Armando yet and Armando also has issues with his family. Armando’s family wasn’t entirely accepting of him being gay. They might even reject Kenneth as well. Kenneth’s family didn’t want him to deal with that and so they cautioned him about waiting. They wanted him to wait until he had met everyone before he proposed. They were worried about him and Kenneth didn’t want that to get in the way of his good mood. He was happy about moving to Mexico. He couldn’t wait to be with Armando and so he’s going to propose when he’s ready. Not when everyone else is.

Jenny meanwhile is going back to India. She was in love with a man named Sumit and he was divorcing his wife to be with her. Divorce is a big deal in India. People didn’t just get them as fast as they do in the States and so Jenny knows that Sumit is taking a huge step for her. Sumit chose her over his family when he decided to get a divorce. Sumit was still trying to fix things with his parents because he does love them and want them in his life. He just wasn’t willing to give up Jenny for them. Jenny and Sumit are together. They are a package deal and everyone else just has to agree with it or leave.

And Brittany left her home in Florida to go move to Jordan.