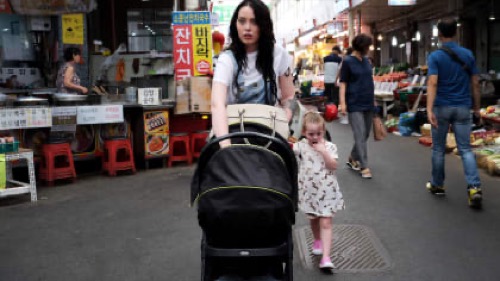 Ari’s mom goes on the offensive. Brittany and Yazan turn to an ally for help. Kenny and Armando’s first trip into town together worries them both. Tired of Jihoon’s lies, Deavan presses for the truth.”

Tim has arrived in Columbia with his cat and he is excited, but nervous and terrified because he hasn’t seen Melyza in seven months. Meanwhile, Melyza has mixed emotions when she is on her way to pick up Tim at the airport, she brings her dogs with her. Tim has no idea how Melyza is going to receive him after all the bad things that they have gone through. She runs to him and they hug and kiss. Melyza says that Tim looks so different, he gained weight. He just flew down on a very uncomfortable plane, he is 6’ 4” and her car is really small. In the car, he tells her that he is grateful for this opportunity. Melyza wants to believe that it is going to work, she just hopes he is committed.

Deavan is with her mother in a market, they arrive two nights ago in South Korea and it has been a disaster. Jihoon lied about his fiances and they had to move into a hotel. The market is crazy but super fun. There are so many different shops, anything you can think of is in that market. Deavan is able to order food in Korea, she is super proud of herself. Meanwhile, her daughter is really enjoying looking at the different fish in the market. But they sit down to order food, there are no pictures and they start to have problems. They end up getting bugs served to them. Then they talk about Jihoon and how he lied to her about the money just to get her to go there sooner. Deavan says that she wants to take the rest of her money and leave, go back home to America. Her mother says if she were to make the decision they would be back on the plane right now.

Kenneth and Armando are out taking a walk, Kenneth arrived there two days ago and they are getting to know their city. Armando wants to hold Kenneth’s hand, but he won’t and Armando is a little disappointed. Kenneth is worried, he doesn’t know what people’s reaction will be here and he is nervous. In fact, Kenneth is worried that they can be hurt.

Tim and Melyza are taking a walkout and around town. They sit down and share a beer, she tells him that she has questions about the girl he was with. He says it was a woman at work, they started flirting and then he invited her over and things got out of hand. He says he got tired of the physical distance, he broke down. She tells him that it makes no sense, he is being selfish. She found out about his infidelity by looking at his social media, he didn’t come out and tell her.

Brittany moved to Jordan two days ago and since then, everything has exploded with Yazan and his family. They are going to talk to his uncle who may help to speak to his parents and give them more time to get married. Yazan tells his uncle that his parents think Brittany is delaying the marriage. Yazan tells him that they need time to get to know each other. His uncle says that she must change the way she dresses, her job, many things if she is going to live like them and convert. His uncle agrees to speak to his father and ask for time.

It has been a few days since Ariela and her mom have checked out the hospital. They are out walking and they stop for coffee with Biniyam. Janice wishes that the hospital was a disaster so she could take Ariela home. Janice asks Biniyam about his first wife and why she left him. He doesn’t really know why she left him. Janice asks him if his plan is to go to America, he says no. Biniyam says his singing and dancing with support them. Ariela is worried that a lot of the financial burden will rely on her, she does freelance editing and writing. The last thing Ariela wants is to have her parents support her. Janice tells Biniyam that Ariela left a privileged life to join him in Ethiopia.

Deavan agrees to meet Jihoon and his parents for dinner. His parents apologize to her for not giving money and helping. She tells them that it is not their responsibility is Jihoon who needs to support her and the children. She asks why the money is in his mother’s name, he says because he didn’t want to make another mistake with that money. Jihoon keeps talking to his parents, the translator is not working, Deavan is upset that he is not translating for her. She tells him that he ruined her life, his parent’s laugh. Jihoon gets up and leaves.