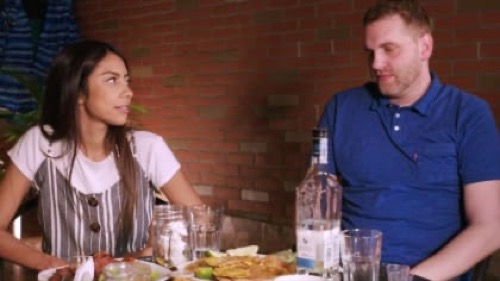 Deavan gives Jihoon a shocking ultimatum; Tim seeks forgiveness from Melyza’s mom; running out of options, Sumit reaches out to his brother.”

Ariela’s mother is still worried about her. Her mom went with her to Ethiopia because she was concerned for her daughter moving to a foreign country and she wanted to make sure both her daughter and her future grandchild would be safe. Only her mother was also worried about her son-in-law. Biniyam and Ari have not known each other long. They were still strangers in a sense because what they had was a vacation hookup and they were only making it work now because Ari is pregnant. The pregnancy was not planned. Ari and Biniyam were surprised when they found out and Biniyam’s current situation is eerily similar to what happened with his ex-wife.

Biniyam’s ex-wife is also an American. She moved to Ethiopia to be with Biniyam and they have a son together. His ex-wife stayed in the country until the marriage broke down. She then gave up and she took her son with her to the United States. Biniyam, therefore, is taking a huge risk by getting with another American. He’s trusting Ari not to take another son from him and so her mother was worried because she didn’t think Biniyam would want Ari to visit the States with the baby seeing as what happened to him before. Ari’s mother was concerned she might be losing her own child if that’s the case.

Only Biniyam’s family were worried as well. They asked Ari about what would happen if their marriage broke down and Ari swore she would only move back to the States if Biniyam gets to come with her and the baby. Ari also said that she wouldn’t take Biniyam’s baby away from his family. She didn’t want to hurt him like that because she knew about his past and so hopefully she meant what she said. There’s really no telling what might happen unless something goes wrong in the marriage. Biniyam and Ari were both thinking they’ll be happy forever and it doesn’t really look like they made any plans for anything else.

Deavan and Jihoon were another couple that didn’t make any concrete plans. They got married way too fast because they got pregnant during a fling and now they’re just realizing how hard it will be having to depend on each other and live together. Jihoon had told Deavan that he has two jobs. He said he saved up all this money and it turns out he was lying. He has one job. It was part-time and it barely helping to pay off his debts. Jihoon gave what little money he had to his mother to hold. He had needed to ask his mom to follow him to the ATM to get the money and he was hoping with what little money he had that there would be enough to convince Deavan to stay in South Korea.

Deavan so far is not convinced. She feels tricked because she asked Jihoon for months to confirmed he saved up enough money for the whole family to live together and he lied. He lied to get her to come to South Korea. She packed up everything back up and that includes her two children and she flew to be with him, but then quickly learned he lied about everything. Jihoon lost her trust with those lies. It was going to be an uphill battle to regain that same trust and right now Deavan wants to go home. She wants to go back to the States. She feels like her mother is the only one she can trust and it doesn’t help that her mother is in South Korea talking her into coming back with her.

It was hard for any relationship to go forward when the trust was gone. Just ask Tim and Melyza. Melyza still hasn’t forgiven Tim for cheating on her and it was almost a year ago. She’s known about it right after it happened. She, therefore, had all these months to get the answers she needed from him and so there’s no reason why she’s still asking him about nearly a year on. Tim has apologized. He also moved to Colombia to be with her Melyza said that it means nothing. She claims that Tim has not regained her trust so far and that she doesn’t see him moving down there or giving up his whole life as a fix.

Melyza is still angry about the cheating. She’s still throwing it in his face and so why is he down there? Why is he subjecting himself to apologizing for the rest of his life to a woman who won’t forget? Who probably cannot forgive him? Tim is trying here and it might not ever be enough for Melyza. She should either make the choice to forgive or cut him loose. She wasn’t helping either him or herself by stringing him along. Melyza allowed Tim to move down there and she allowed to move into her house. She was cooking breakfast one for him one day and the first thing she said in her confessional was that she still hasn’t forgiven him. And at this point, it’s like piss or get off the pot.

Sumit and Jenny were at least trying to make their relationship work. It was just everyone else that kept getting in the way. Sumit’s parents didn’t approve of Jenny and Sumit’s friends made fun of Jenny and Sumit’s relationship behind Sumit’s back. Sumit just wanted someone in his life to accept Jenny. He turned to his brother and his brother was reluctant to side with him because he didn’t like how it hurt his parents. The brother said their parents were worried about what society would say. They didn’t want to be judged by their friends and they were already facing enough issues with Sumit going through a divorce.

Sumit’s brother thinks things might be different if his parents meet Jenny. Jenny was nervous about the idea. Only she’s willing to try anything at this point and Sumit really wants to marry Jenny and keep his parents in his life. He didn’t want to have to choose between them. Sumit and Jenny were willing to meet with his parents together and now it’s up to them whether or not they want their son to be happy. Ari’s mother claimed she wanted her daughter to be happy and then she was making snide comments as she watched Biniyam dance with his dance partner. His dance partner was also his ex-girlfriend. And so Ari didn’t want to hear from her own mother how pretty this woman was.

Or how flexible this woman was. Ari’s mother was purposely stoking Ari’s jealousy and she knows Ari is a jealous person. Ari even admits she’s a jealous person. Ari’s mother also asked Biniyam about his past with this woman and how his ex-wife must have felt after Biniyam stayed out all hours. Biniyam said his ex was very jealous. He also mentioned how there was an incident when he was an MC and that the incident involved “accidentally” getting someone’s lipstick on his white shirt. He told Ari and her mother that he spent hours trying to get the lipstick out. Nothing worked and so his ex saw it and she got upset.

Ari didn’t like hearing the story. It did seem odd that a woman would lean that far in to request a song that she would get lipstick on his shirt and so that had both her and her mother concerned. Biniyam has his long work hours working against him. With Tim, it was his affair. Tim couldn’t get Melyza or Melyza’s mother to forgive him for what he did. They were both still upset with him and dinner with the family had been an awkward affair.