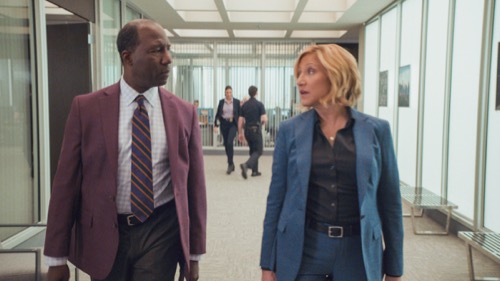 Tonight on CBS their new crime drama Tommy returns with an all-new Thursday, April 16, 2020, season 1 episode 9 called, “Free To Go,” and we have your Tommy recap below.  On tonight’s Tommy Season 1 Episode 9 recap as per the CBS synopsis, “Tommy attempts to help Norah Fayed buy time for her political asylum request to be approved, and stop her parents from forcing her to go back home abroad.”

Tonight’s Tommy season 1 episode 9 looks like it is going to be great and you won’t want to miss it.   While you’re waiting for our Tommy recap make sure to check out all our TV recaps, news, spoilers & more, right here!

Kritten and Pearl Jewelers, 10:21am – a girl is in a jewelry store with her mother and son when she is trying on several rings. Her mother urges her to hurry up because they have to leave to meet their father, she says ok, puts the rings down and turns around. The jewelry store manager notices one of the rings missing and asks her not to leave until they find it, the police are called. When the female police officer asks her to go to the back with her, the girl slaps her in the face which results in her arrest.

Tommy is with Art, the feds have given them seven million dollars for three years for community police, and she needs the money again – she wants to know what the hold up is. He says every grant is getting an up and down. Art tells her to sit tight and stay calm.

A friend of Coopers shows up, his name is Len Egan, Cooper introduces him to Tommy – he brought a book that he wrote for her. Cooper asks her for a minute, he is working with a Saudi businessman, Shaik Hamoud Fayed, about an hour ago his daughter was arrested for trying on a ring, then hitting an officer. This family has money and major flex. Let it go everything is going to be ok, throw the book at her and it is going to cause a major problem.

Tommy meets with Norah’s mother, she says that this is simply a mix-up. Tommy meets with Norah next, she tells her that she took the ring because she needed to slow things down. Her parents are taking her back to Saudi Arabia against her will, she has applied for political asylum. Tommy tells Norah that she is charging her because she would not apologize. Egan tells her that if she does this she is going to get a storm that she doesn’t want.

Vincent wants to talk to Blake regarding Arturo Lopez, he needs some information regarding Edward Wilson, a homeless guy who was murdered two years ago and he thinks they are linked. He wants to know if she can get the autopsy report for him.

Tommy calls in Blake and Ken regarding the Saudi case, Cooper is there. Tommy tells them that the girl said her life is in danger, and she wants to find out more information on her asylum application, she said her professor Dan Ritter is helping her.

Norah’s father, Shaik Hamoud Fayed, visits Tommy. She tells him that she cannot release his daughter. He says that Norah has always wanted to study in the US and she has been diagnosed with anxiety and depression, she needs rest and not in a prison cell. Tommy mentions that Norah told him that he jailed her sister. He says he will arrange a phone call with Norah’s sister, and prove to her that he only has both his daughter’s best interest at heart. Ken says that Ritter has vanished.

Blake goes to look for the autopsy record, she takes photos for Vincent.

Tommy reads up on the internet about Mr. Fayed, he is the 31st richest person in the world. Tommy speaks to Norah’s sister, she says that she hasn’t left this wing of the house for two years. She says that by detaining Norah, it causing media attention and people in her country will know that she is being defiant and they will not take it lightly. If she returns home, their father will lock her up, but for her safety.

Blake goes to meet Vincent at a bar where he asked to meet and he doesn’t show up. She goes to leave and the man watches her.

Tommy goes back to see Norah and tells her that they cannot find Ritter. Norah tells her that she has to find him, he was helping her and trying to expedite things. She says that her sister had to choose between beheading and living in her room, she doesn’t want to have to do that. She begs Tommy to help her.

Mr. Fayed goes to the media and tells them that the police are holding a mentally unstable person, his daughter.

Art tells Tommy that the President is worried about how Saudi is being treated. Tommy goes to see Lou, he says the officer is willing to drop the charges, so why is she trying to help protect this girl. In the end, he wants her to do something for him and she is not willing.

Tommy finds out that Ritter is dead, he was found at the bottom of a cliff.

Tommy is at home, her daughter tells her that she is splitting up with Henry for real. And now that it is decided, she finally feels like she can breathe for the first time in months.

Ritter was hit with a blunt object, he was murdered. After his last class, nothing, he vanished.

Blake tries to call Vincent, she hasn’t heard from him and keeps getting his voicemail.

Norah’s mother visits Tommy, she tells her not to let her daughter’s idealism crowd her judgment, and the longer she spends in prison, the harder it will be or her when she goes home. Tommy asks if she and her husband had ever met Ritter, she says she heard that Norah had feelings for him, but they never met him.

Next, Tommy meets with Mr. Fayed and his attorney, they try to threaten her but she won’t back down. Mr. Fayed maintains that his daughter is mentally unstable, Ken says the law states that she would then need to be assessed by two doctors, one of their choosing and one of Tommys.

One of Tommy’s officers gets a videotape of Ritter leaving his office on Monday, getting into care with Mr. Fayed, but his wife said they never met him. Tommy questions Mr. Fayed on it and he says he wanted to speak to Ritter. He says he was concerned that Ritter was trying to seduce his daughter. He says there was no romance on his part, and he let him walk.

Blake goes to Vincent’s apartment and finds the door unlocked. She goes inside and looks around, just then Vincent texts her and tells her that he is sick in bed, just email him the info. She goes into his room, he is not there.

Next, Tommy interviews Jamal, Norah’s bodyguard. She says that Ritter fought his attacker, if the DNA on the bottle of water he drank matches the DNA on Ritter, they are going to speak again.

Tommy thinks Jamal is going to run to someone, he gets in the elevator and stops it. In the elevator, he calls someone. He comes back up the elevator, outside Tommy is there, he asks for a lawyer, he says he killed Ritter, he loves Norah.

Tommy meets with Norah and her family, she tells them about Jamal. Norah tells them she doesn’t want to go. Tommy says that Norah is a witness to a murder, she will have to stay in the US until the trial. Her father tells her that if she wants to be an American that bad then so be it, but she will no longer be his daughter. Norah tells Tommy that this is what she wanted, but it is not how she wanted it. Jamal was a good man, she believes that Jamal did this for her mother because her mother thought she was in love with Ritter. Norah tells Tommy that neither Jamal or her mother will ever admit the truth.